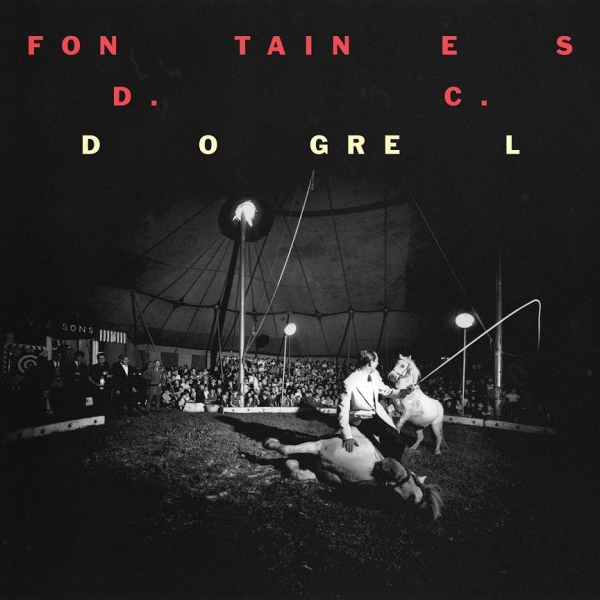 Since they released their debut single, “Liberty Belle”, in 2017, it’s proven almost impossible to escape the fervour surrounding the Dublin quintet, Fontaines DC.

Whether it was the pint-sized bravado of the video to "Big" or their blistering SXSW set, attended by celebrity converts including Steve Lamacq, the anticipation surrounding their debut record has been stifling. Not that there hasn’t been good reason for it; the cocksure protagonist in "Big" only worked because of the digestible, forthright nature of the track itself, and "Roy’s Tune" is a wistful indie tale of life’s harsh realities that belongs right up there with the early Arctic Monkeys output. The expectation certainly wasn’t unfounded, even if it was distracting.

With seven of the eleven tracks here having already been released as singles, the core of the record should come as no surprise to fans. Drawing on influences as lofty as Irish poetry and as simple as meeting a girl in a bar, Dogrel is an album that strikes right at the very heart of the Dublin the band paint. There are nods to topics that will resonate beyond the Irish capital, such as the rollicking "Boys In The Better Land", in which vocalist Grian Chatten mocks the marketed perspective of both Ireland to people overseas and vice versa, targeting personalities including the “runaway model with a face like sin and a fist like a James Joyce novel”.

Elsewhere, his depiction of the TV as a reflection of daily life on "Television Screen" is a sobering one, a moving example of the meticulousness to his writing, while the candid opening lines on the rallying "Chequeless Reckless" are sure to be a regular point of reference highlighting his distinctly sardonic style.

The focus however, and the real beauty of Dogrel, lies in its localisation. It isn’t just Chatten’s distinct drawl, even though that certainly plays its part, but the combination of the harsh and the poetic to paint a picture of life right in the band’s home city (although Chatten was the only member who actually grew up in the area). The Cure-esque track "The Lotts" sees him implore the song’s targets to not be “falling hard on the tenement scene”, the track itself named after an area of the city, whereas closer "Dublin City Sky" only really hits once you start to appreciate its belonging inside a busy pub. The poetic ring to lines such as “to know you is to love you and I love you even still” as well as its irregular rhyming scheme reflect the band’s love of the city’s cultural legacy, a love that brought them together in the first place and continues to heavily inform their sound.

The band’s efforts at preserving the memory of these cultural and social particularities of their city are admirable, and deeply affecting. Dogrel is evocative, meticulous and rich in a love for the character of Dublin, and all the little things that, past and present, contribute to that. Despite the self-deprecation of the title (or high praise, depending on your take), Fontaines DC have vividly captured a spirit specific to their experiences of the city. And that, surely, makes them worth the hype.