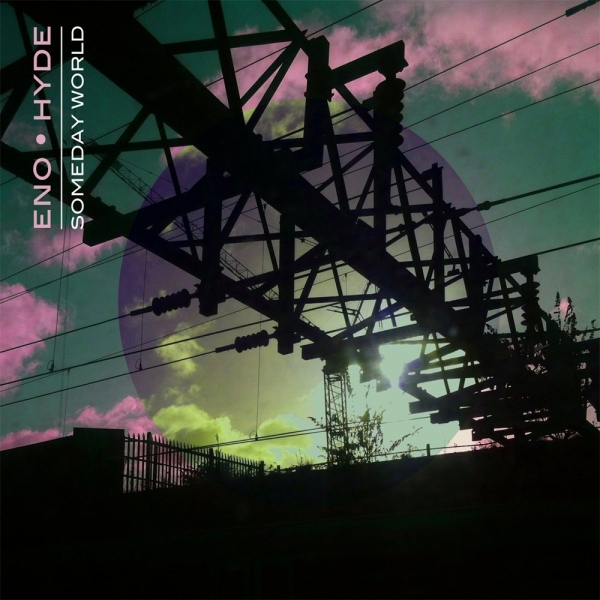 It seems almost like an act of undue treason not to defer to an artist’s stated intention when evaluating their work- especially when that artist happens to be Brian Eno. In the press material for Someday World, his most recent collaboration with Underworld’s Karl Hyde, Eno explained that “a lot of the compositions on the album were deliberately irregular and awkward,” mirroring the stubborn architectural impositions of cities upon unaccommodating geology. Few people could get away with underselling themselves so, and it’s a shame that Eno’s prescience here is too accurate to ignore.

Instead, the record commences on the relative misstep of “The Satellites”, a song swimming in so many reverberating, sonorous guitar notes and tinny, piercing alto sax fanfares (provided by erstwhile Roxy Music player Andy Mackay) that it becomes hampered by a lack of focus, finally stepping back and allowing itself to drift away meekly on a shapeless, spectral vocal. At 5’33”, it would rank among the shorter songs in either man’s back catalogue, but here the sheer density on display does it no favours- the prolongation veers toward indirectness. Shoring up the first half of the record, “Witness” suffers from the same complaints, when after a preliminary section of contemplative verses about dreaming of “the end of the world, watching everything you love slip beneath the flood,” it pastes a heavy and distorted drone over directionless drums.

Over the course of the Someday World, this manifests itself in an irregular pacing, both between tracks and within them also. There are highlights like “A Man Wakes Up” with its scratching and screwing percussion and viscous basslines harking back to Eno’s Before and After Science, all while it paints a picture of claustrophobic alienation: “Too hard, too close… he gets up and walks around, his limbs an unfamiliar rhythm.” Here, the focus is to be found (however briefly) in the minutiae- understated guitar solos take precedence midway through, before the song is swept away on crowded instrumentation and vocal harmonies melded to gurgling samples.

The aptly named “Strip It Down” has Eno’s deep melodious burr take a rare prominence as playful keyboard flourishes dart either side of a shimmering synth and distant, watery vocals. Again, there are these brief moments of euphonious clarity, not always foreseen- somehow gratifying in their brevity, but frustrating in their paucity. The hollow, brooding trip hop whine of “Mother Of A Dog” may be the album’s zenith and the closest thing to “ambient” that Someday World gets, but it is followed by “Who Rings The Bell”, the closest thing to an anodyne pop song that would fit nicely onto U2’s (Eno-produced) Joshua Tree. ‘When I Built This World’ shepherds the record to an uneasy close with its nervous urgency, all filtered, jolting vocals, anxious saxophone parps and clashing discordant guitars, as Eno plays remorseful God: “When I built this world, I built it full of guilt | I filled it with regret and pain, with sin and then with sin again.”

Karl Hyde speaks of being united with Eno by a love of afrobeat, yet the rhythms that informed much of what is generally held to be the seminal Eno collaboration record (My Life In The Bush of Ghosts with David Byrne, the sample-happy collage of rolling grooves and uncanny sonic textures) seem for the large part absent here. For all the apparent anarchy, My Life… was a record of measure and purpose: a set of input commands relayed with chaotic perfection. Even when it was held to be fit only for aging ravers, the music of Underworld maintained a kinetic muscularity (Hyde and band mate Rick Smith also experimented with ambient music- on the delightful “Simple Peal”, for instance). As could be expected, Someday World has a flair for inventive interlocking compositions, but these are out of step thanks to its uneven pacing and are often palmed away by an enthusiasm for accelerated, busy instrumentation. A deliberate irregularity is not necessarily a redemptive one; lamentably, Eno and Hyde are not quite the sum of their parts.