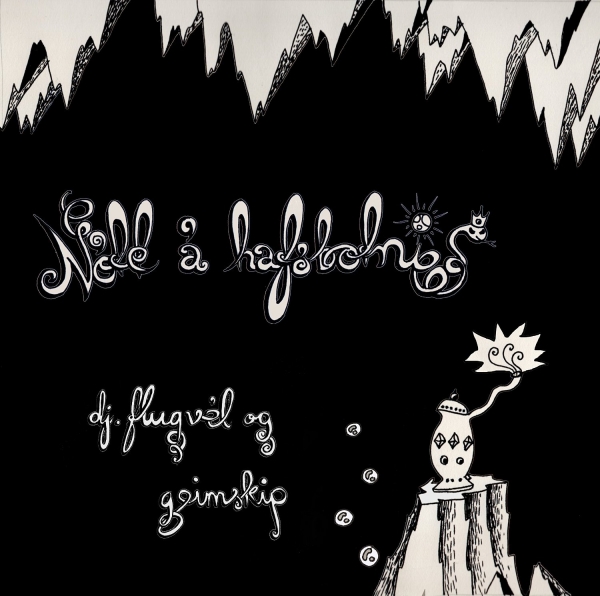 I’ve always been terrified of the ocean. Paddling as a child in the sea at Aberdovey watching my brothers and sisters swim out, it was just an unyielding mass of jellyfish, seaweed and dark shadows waiting to pull me under.

From there on in it didn’t matter whether it was the turquoise waters of Belize or rolling waves of Penarth, my time spent in water was badgered by anxieties. I suppose the most surprising instance came not too long ago when I was looking through the Turner Collection at the Tate Britain: those tempestuous waters splitting oak and colours of the land above being swallowed by the beyond. My stomach swirled and my breath escaped me just staring at it. That jarring, elemental physicality was completely unique, until I heard the new album from dj. flugvél & geimskip.

On this, her new record Nott a Hafsbotni, she has waded away from the shores of her native Iceland and condemned herself to time alone in deep water, conceptually basing her writing around the marine. This makes for an unnerving, ungrounded venture that is everything but smooth – but what else should you expect from the unknown?

Despite being made up of a plethora of warm transients and analogue instrumentation, the album’s texture is unconventionally abrupt and irrational. After establishing tension, "Draugalestin" doesn’t exactly explode but rather writhes and wriggles, never allowing the listener to digest its nuances. You’ll struggle to observe a facet like its cycling percussion before it is switched for a lo-fi substitute, the distant wails of atonality or is swallowed by the frequencies beneath. As you’re coerced into listening as the beat unravels in the moment, without any really change in sustenance or momentum, it is manipulated into something completely different. This is the DNA that makes up the majority of the release.

I guess the one worry would be that, taking on such a grandiose concept with this level of commitment in the writing, you could lose an essence of dj. flugvél og geimskip. It is a little more maligned than what anybody with prior experience with her intimate live shows would expect, but this aloofness creates a unique environment for those flashes of eccentricity to manifest. Whether you’re tuned to the whistle solo on "Zosimos", feel yourself alleviated by "Jarðætan"’s Eastern tonality or are entranced by rhythmical typewriters on "Nótt Á Hafsbotni", these anomalies on the horizon are for clutching onto on an otherwise turbulent journey.

Built on a four note, disarming and militant bass line, "Gamli fjandi" is stunning. Cut with samples and pitted against incisive synthesiser lines, it self-references and surmises pedal points from earlier on in the album using layers of vocals and percussive melodies. Without ever needing to go any further than the blueprint it establishes in its opening flurry, it feels very much like the Magna Carta to understanding Nott a Hafsbotni.

I appreciate how rare it is for a piece of art take you to the places of impotence and weariness I felt listening to Nott a Hafsbotni, and that’s why I implore anybody to listen to it. It is monotonous, but only by its own idiosyncrasies and constants. You end up with one image of the album that is somewhat hard to pinpoint or compress, with its scale becoming more disorientating the more you analyse it. If you’re the kind of person whose paradise starts on white sand and ends at a sun lounger, maybe you’ll share a different experience with it. Maybe you’ll be as green around the gills as me. One thing is for sure, it will leave a few grains of sand on your person that will take a long time to shake off.