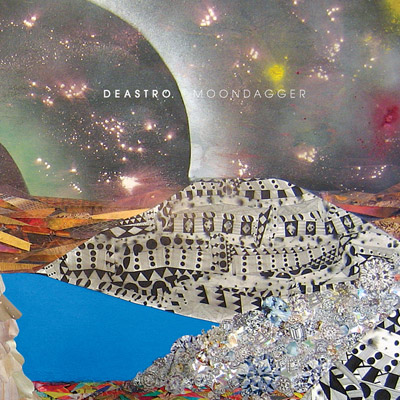 There is no possible redemption for any band that names one of their songs ‘Daniel Johnston Was Stabbed In The Heart With The Moondagger By The King of Darkness And His Ghost Is Writing This Song As A Warning To All Of Us’. Come back, Panic! At The Disco, all is forgiven. Even if Moondagger were as sublime as Veckatimest or as revolutionary as L’Histoire de Melody Nelson, that title alone would be suffice to guarantee them a lifetime’s entry in the annals of indie wankerdom, but their music’s practically a fast-track pass to the front of the queue.

Hailing from Detroit, Randolph Chabot Jr has probably never heard The Enemy or even been to Coventry, yet Moondagger sounds suspiciously like Tom Clarke and his mullet-topped brethren frotting with Deerhunter to the tune of the Tesco Value version of Merriweather Post Pavilion. All the requisite synth-pop elements are there – disco beats, programmed kids’ toy beats, and tsunamis of haze – but intermixed with the musical equivalent of breadcrumbs and pork starch. Opener ‘Biophelia’ might border on poignant, were it not for a ‘heard it a million times’ Pikachu bleep and the numb urgency of its soaring chorus, all sterile rockets and fireworks taking off in quick succession. It dives into ‘Parallelogram’ (I wonder where he got the idea for that song title), with vocals straight out of MPP – saccharine and rushing atop an all-enveloping wall of tropical sparkle and stormy crashes – but it never builds to those same euphoric climaxes that Animal Collective do so well.

‘Greens, Grays, and Nordics’ makes plain that Deastro needs to attend lessons alongside classmates VHS or Beta, The Departure and The Bravery about why some musical trends were left in the ‘80s for a reason, and the offensively garrulous paean to Daniel Johnston mines the same grating vein. Despite starting in the same bland, dreamy way as a number of other songs present, it builds into what’s possibly the worst chorus of any song this year – think Tom Clarke joining PoP!, Hugh Grant’s fictional band from ‘Music & Lyrics’, attempting to write a Thatcherite protest song. Wincing yet? Try the chorus for size – “We’re gonna build this town / We’re gonna build it right / We’re gonna save this world / We’re gonna make some right”. It’s almost enough to make John McClure (Reverend & The Makers) sound like Dylan.