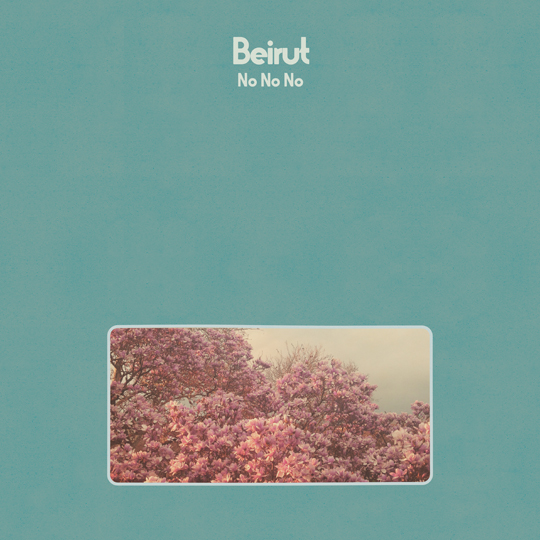 If you’ve been following Zach Condon in the decade or so since he first began crafting baroque world-pop gems in a bedroom somewhere in Santa Fe, you may have come to expect a few things from an album carrying the Beirut moniker.

With the exception of a slightly pared-back sound that emphasizes drums, bass, and piano over pump organ and ukulele, No No No fits that mold to a tee. Clocking in at just over twenty-nine minutes and containing songs named for “Perth”, “Fener”, and “Gibraltar”, No No No is, on paper at least, the latest in a growing line of very good Beirut albums. In practice, it is that and more: nine sketches of heartbreak and hope played with a newfound ease, a short collection that yields greater returns with each listen.

Though longtime fans may bristle at the album’s somewhat stripped back nature, the truth is that Condon and company have picked up right where The Rip Tide left off. Early releases sometimes felt like the work of an obsessive tinkerer, a man who believed that “every song needed to be bigger and louder than the last”, pulling in sounds from all over the world to pour layer after layer over his powerful vocal melodies. But The Rip Tide found the band—and they did, more than ever, feel like a band rather than a loose collective assembled around a frontman—settling into a sound that utilized their trademark Balkan folk swing without overstating it. A few years removed from questions of cultural appropriation, it was hard to believe there were ever any questions to begin with; The Rip Tide didn’t sound like a teenager’s take on traditional European music, it simply sounded like a Beirut album.

And so it is on No No No. Condon remains the primary songwriter, but the sense of continuity here may actually be rooted in lesser-known personnel. For a band that seemed to shift around the New Mexico native with each previous album—Wikipedia lists fifteen total members past and present, a number that doesn’t even include guest stars like Sharon Van Etten—this most recent iteration of Beirut is remarkably similar to the last. Perhaps as a result, the band—Paul Collins (bass), Nick Petree (drums), Ben Lanz (trombone), and newcomers Kyle Resnick (trumpet) and Aaron Arntz (piano)—sounds lived in and loose. They play with such an organic comfort that even the occasional embellishment (the horns that flow rapidly over the closing of the title track, the strings that seem to burn up and twist beneath “So Allowed”) registers as delightfully of-the-moment.

And it’s not just the band that sounds breezier: their newfound dynamic has also allowed their singer to shed some baggage. It couldn’t have come at a better time. In the years following The Rip Tide, Condon was hospitalized for exhaustion, underwent a divorce, and scrapped a slew of material. By last winter, however, he was well on his way to finding new love, and Petree and Collins “set up a system where we would show up to the studio every day and record the silliest ideas, no matter what, and throw judgment and seriousness out the window.”. Condon sounds at ease throughout as he sends his solemn baritone soaring; his delivery even verges on cheeky at times, as though he’s well aware of the contrast between his voice and the oft-upbeat backing.

Even so, the heartbreak that preceded No No No can’t help but seep through, and there’s a sense of sepia-tinged melancholy here that’s hard to shake. Shining through just as clearly, however, is a sense of optimism. It’s there in the joyous bounce of a piano melody stair-stepping its way over a djembe beat, and it’s there on the ride into a “Golden Age” sunset that is “Pacheco”. Condon and his bandmates have styled this album in chiaroscuro, allowing light to fall unevenly on otherwise dark subjects.

All that contrast can be disorienting on introductory listens, and it doesn’t help that Condon refuses to provide any clarity. “How do you know / at once / at last / at all?” he wonders on “At Once”. On Fener, he admits “I had to know/ where you had gone”, his voice gaining altitude with each syllable. On album closer “So Allowed” he confesses “I long to say you’re mine”. Any of those lines could refer just as easily be to his ex-wife as to his new relationship (Though, admittedly, Fener refers to a neighborhood in Turkey that Condon spent time in with his more recent love.). There are no hints provided in the track order, either: the poptimistic one-two punch of “Gibraltar” and “No No No” fades immediately into the self-examination of “At Once”; the victorious sway of “Pacheco” is followed by the nervous euphoria of “Fener”.

Condon has no interest in telling his listeners how to feel, nor should he. He’s given them a frame, but they have to provide a picture. Ultimately, one of No No No’s greatest strengths is its lack of clarity. Sometimes love and loss meet in surprising ways. Sometimes an artist’s simplest work is also their most complex. And sometimes a good Beirut album on paper is a near-great Beirut album in practice.