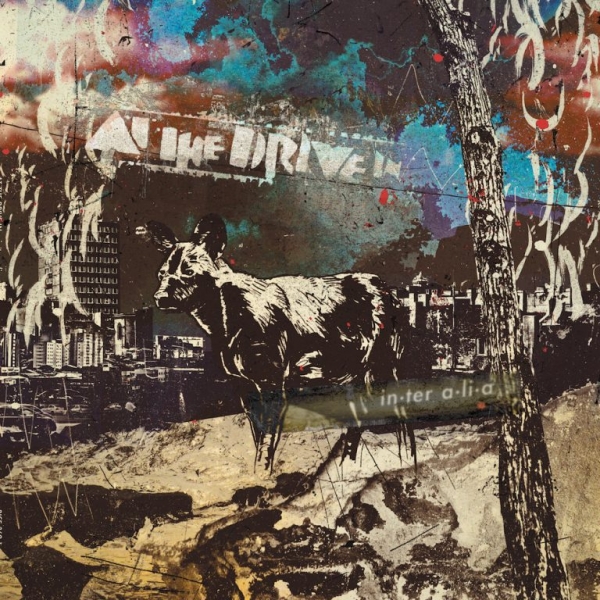 At the Drive In’s Relationship Of Command was one of those albums that burned a flashbulb memory in your brain. It was a landmark record so explosive you remember that exact moment you heard the adrenaline rush of “Arcarsenal”, or how “Enfilade’s” bellowing chorus and the white hot assault of “Cosomonaut” made you feel the first time they tore like wildfire through your consciousness.

But that kind of frenetic energy can only burn bright and fast, and only a few months after the album’s release, the band imploded. Frontman Cedric Bixler-Zavala and guitarist Omar Rodríguez-López went on to traverse proggier universes with The Mars Volta while founding guitarist Jim Ward, bassist Paul Hinojos and drummer Tony Hajjar formed Sparta. That was 27 years ago, and while the musical landscape has shifted, Relationship of Command has lasted the test of time, indefatigable and resolute as one of the best post-hardcore albums ever made. in.ter a.li.a (Latin for “amongst other things”) has its work cut out if it's to even remotely recapture that fire.

So does it? Recovering a moment of magic from two and half decades ago would be an impossible task for most bands, but in.ter a.li.a fearlessly and triumphantly sets expectations ablaze. Founding guitarist Jim Ward left the band last year, but his ample replacement, Sparta’s Keeley Davis, has slotted into the complex ATD-I dynamic with ease. From choppy opener “No Wolf Like The Present”, in which jarring guitar stabs and Cedric's breathless vocals tumble over each other, to closer “Hostage Stamps” which starts off with Deftonian-like electronics but quickly collapses like a spent lung into squalling guitars, the band’s chemistry is electric.

These tracks aren’t driven by the same blistering sense of panic that drove their predecessors, but a nervous tension buzzes through the jagged “Governed By Contagions” and MC5-aping “Continuum” where tight, angular riffs jostle for space. Ridiculous lyrics still abound of course: “Inoculated at the liquor store. Drunk on the piss of semaphore embers” (“Hostage Stamps”) and “Incurably Innocent” tackles sexual abuse: "He keeps a hiding your photograph of the moment that you needed to emasculate", but they’re woven into delicious choruses and bendy, addictive rhythms.

The Relationship Of Command days were defined by chaotic performances where the band and their instruments barely made it through to the end in one piece - their 2000 performance of “One Armed Scissor” on Letterman sounded like five different songs being played at once (in the best way ever). But since then the band have learned melody isn't something to sneer at. Tracks like itchy highlight “Tilting At The Univendor” and the twisting “Pendulum In A Peasant Dress” are declarations, at long last, for the future, and these post-punk renegades sound revived and pumped up. In.ter a.li.a is better than we dreamed it could be. Prepare to fall in love all over again.