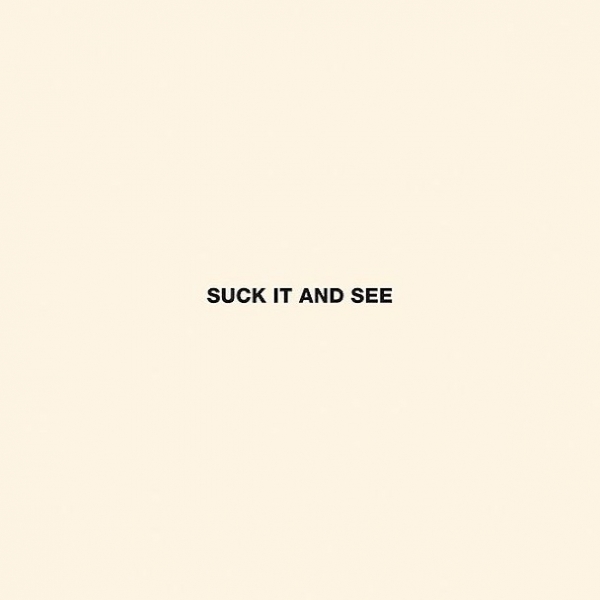 This is a record the Arctic Monkeys were surely destined to make the moment their careers shot into orbit when ‘I Bet You Look Good On The Dancefloor’ became a MySpace phenomenom in 2004/5.

Four albums on, chief monkey Alex Turner has bagged a TV presenter girlfriend and has notched up enough time spent stateside to credibly write songs about the bragging rights of wannabe rockstars (‘Fake Tales of San Francisco’, anyone?). His band are a massive success commercially and appear to be living the dream – and as such, new record Suck It And See could every bit be the soundtrack of their lives.

The sharp-witted social commentary of the quartet’s breakthrough singles has all but vanished, along with the lifestyle of a Sheffield teenager who sang about watching hot girls on the dancefloor and scummy men fighting on friday nights. Having upped sticks to a trendy New York suburb and shacked up with a model, the everyday patter of Turner’s lyrics has been necessarily refined into a more dreamy poetry. Musically too, the Arctic Monkeys have shrugged off their hurried thrashing adrenalin-fueled adolescent angst and replaced it with a more considered and almost epic-sounding stadium-style rockout.

‘The Hellcat Starspangled Shalalala’ is the the most obvious example and while at first listen could easily be dismissed as a US chart-pleasing sing-a-long, is actually worthy of more praise than that. The anthemic guitar howls and lyrics such as “Makes me want to blow the candles out / Just to see if you glow in the dark” are less fake tales from San Francisco and more postcards from New York. Turner’s highly engaging lyrical charm is still the main feature of Arctic Monkeys’ music and if anything it seems more confident, with the slower pace of the vocals. However, it’s undoubtedly muted by the lack of real-life charm that comes from rubbing shoulders with famous people rather than scummy men on messy nights out in northern England.

‘Reckless Serenade’ has it’s moments with lines such as “When she walks her footsteps sing a reckless serenade” and joyfully jangly guitars, but is let down by a lacklustre chorus. Similarly the rather whimsical ‘Black Treacle’ comes with pleasingly unconventional rhyming couplets, as Turner sings, “Lately I’ve been seeing things / Belly button piercings / In the sky at night / When we’re side by side”, but like many of the tracks on Suck It And See it doesn’t quite fulfill its promise. ’Library Pictures’ is the one execption to this rule, mixing fast and slow, with reflective lyrics and simple-yet-infectiously-catchy guitars. There’s even a playground chant of “Give me an Eeny meeny miney mo/ Ip dip dogshot rock n roll” thrown in at the end. ‘Brick by Brick’ and ‘Don’t Sit Down ‘Cause I’ve Moved Your Chair’ bear the strongest similarity to the Arctic Monkey’s past form, and sit rather oddly with the rest of the record. And, they’re certainly not high points.

If there’s a slightly unnecessary epicness to many of the songs, with their drawn out verses and stadium-style guitar riffs – it’s perhaps the noise of growing pains. Arctic Monkeys are expanding, reaching for a more mature type of sound to the much-hyped youthful exuberance of their breakthrough records, but not yet quite grasping it. It’s certainly no criticism to say that it will be interesting to see what they come up with next.