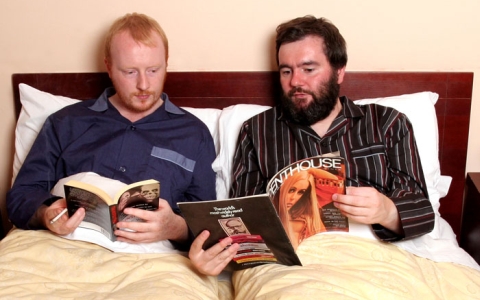 The time has come to make the case for Arab Strap’s formal adoption into the canon of bloody great bands. Although these ‘deluxe’ reissues of the Strap’s first two records add nothing to the band’s existing body of material, the original albums need little augmentation. Here are band who’s music not only had a truly unique sound –something approximating Slint meets Mogwai meets Radiohead meets Leonard Cohen- but also a unique character. These are not the chauvinistic songs of rock music, the self-effacing songs of folk, the posturing of punk or the melodrama of emo; these are something else, a wistful, darkly-humorous guided tour through the inner vaults of man’s modern psyche.

Many songwriters are applauded for “telling it how it is”, for singing about life in all its sordid meaningless details, but Aidan Moffat, Arab Strap’s vocalist (for lack of a better work), took the everyday to extraordinary new depths. His songs, at their best, are narrative arcs and seductive monologues plotting a path of trivial details that make the broad-brush emotions of so many contemporary bands seem insincere. He is crass, he is nihilistic, and he would be irrevocably gloomy were it not for the humour which pervades his songs. Moffat is at once the bard and the jester. And boy does he have a knack for a good first line. Once you’ve heard the opening couplet on ‘Packs of Three’, the first song on Philophobia then there’s really no going back:

“It was the biggest cock you’d ever seen, but you’ve no idea where that cock has been.”

Deep in couplets such as this are all the fascinating contradictions in Moffatt’s storytelling. Here is a man engaged in seemingly endless accounts of casual sex, adultery, infidelity and smoldering passive aggressive mindfuck relationships, and yet the perspective adopted is not one of a boastful cassanova, but of a remorseful, weary idealist. He pines for the functional relationship which his failings, and his ‘birds’ shortcomings render fruitless and self-destructive.

It’s easy to concentrate on the lyrics and stories in the Arab Strap’s albums, but this does not diminish the contribution made by Malcolm Middleton, the composer/producer of the duo. Without his adventurous, technically impressive distillation of post-rock, folk and electronica Moffat’s lyrics would have none of their edgy potency.

The variety in Middleton’s compositions throughout the band’s career is staggering, most notably on later albums such as Monday at the Hug and Pint, but they generally build upon a foundation of plucked guitar and bass progressions heard at the same time in Come on Die Young-era Mogwai, and simple electronic and live drum loops with the occasional organ, distorted guitar or string section. Throughout Philophobia and the best tracks of The Week… Middleton is content to gently reflect the changing tones and events in Moffat’s narrative, nudging along the progression of his musings rather than seeking to heighten the pathos through sheer force of will.

Middleton knows when to give Moffat his room, but is not averse to a dramatic crescendo when it is warranted. The closing minutes of Philophobia’s ‘New Birds’ is a case in point, with the accompaniment almost completely silenced for Moffat’s emotive closing statements before the songs epic coda crashes in torrents to close out the track.

So what of the albums themselves? Let there be no doubt that Philophobia is the masterpiece of the pair, and indeed of the band’s entire catalogue. Throughout the album Moffat’s lyrics emerge from the mire as a poignant, witty, and engaging stream of consciousness, like a Palahnuik novel set in the Glasgow. Once again it is the trivia in Moffat’s stories which sell them as genuine autobiographical snapshots rather than the broad all-encompassing themes explored by so many bands these days. On ‘(Afternoon) Soaps’, for example, a fight erupts over a girlfriend’s taste in music, “last night it starts with that Joan Osborne song; I hate it anyway, but you made it worse,” and on ‘One Day, After School’ a young flame “bought me this steel ladybird thing, it was really cool; and then she said she thought there was no future for us.” Musically Middleton is at the top of his game, carefully orchestrating movements that wax and wane from delicate acoustic moments through to all-out waves of noise and back again, often multiple times within the space of one song. The choruses are memorable, even without chanted refrains, the riffs powerful with just enough quirky moments of organ or percussion to prevent the whole progression from becoming staid.

In contrast to Philophobia, The Week Never Starts Around Here is an album that dares you not to listen to it. In an inexplicable attempt to prevent anyone from ever listening through their debut album it begins with three tracks that are almost unpalatable, even to seasoned fans; they are largely unmixed and unstructured combinations of inaudible vocals and crashing Casio drums which fail even to sound ‘experimental’ in their amateurism. When the lo-fi gloves are finally taken off on the fourth track ‘Gourmet’ one is left positively ecstatic to hear a bit of compression and to actually be able to understand what Moffat is saying. Hidden towards the back of the album, beginning with the breakthrough hit ‘The First Big Weekend’ is a series of songs which show the potential that would be realised so decisively in Philophobia. ‘The First Big Weekend’ is five minutes of wonderful vicarious pleasure, a diary of a weekend on the town complete with Simpson’s episodes, drunken trespassing and endless drinking with Middletons’ insistent hit-hats and pounding techno base drum conjuring the immediacy of a great night out while playful guitars echo Moffat’s wandering thoughts. The album closes with the triplet of ‘Phone Me Tonight’, ‘Blood’ and ‘Deeper’, three outstanding, haunting, dirges featuring impeccably recorded strings, and apt use of reverb. ‘Deeper’ in particular is a standout track in the Arab Strap catalogue, perhaps their only song where Moffat speaks completely from the perspective of a victim as he recounts an uncomfortably forced, unwelcome, morally questionably sexual experience which evokes the fear, worry and excitement of pubescent sexuality. While the inconsistency of The Week… can be infuriating at times, by the close of the album the Arab Strap have emerged as a fully realised entity.

The bonus material that accompanies each disc, a Peel session and live recording for each album, make for interesting if unenlightening listening. With the exception of the Philophobia-era Peel session which presents a few of the album highlights in a much more restrained context none of it presents a radically new perspective on the albums themselves, and all of it has been previously released. Those expecting a voluminous encyclopaedic reissue in the vein of Matador’s reissues of Pavement’s back catalogue will be disappointed. Yet the original albums, ultimately, speak confidently for themselves, inviting us all to reassess one of the rudest, and most talented, pair of Scotsmen we are likely to hear from for a long time.