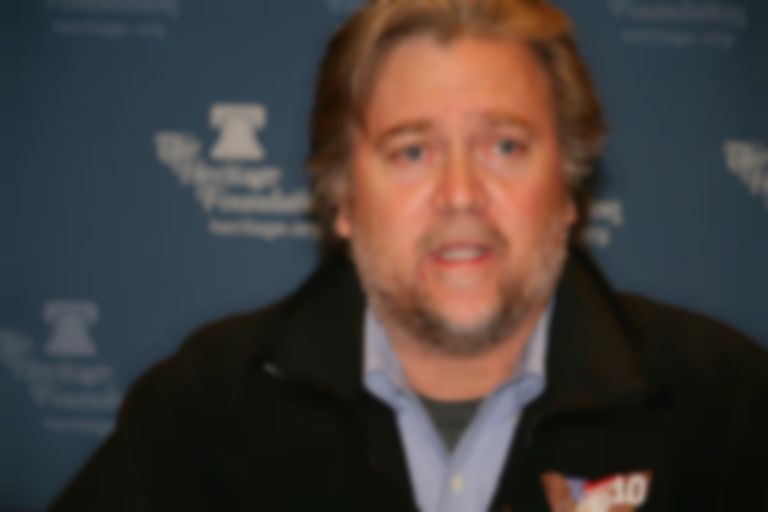 President Steve Bannon (as he's fast becoming known) apparently once wrote a Shakespearean rap musical based on the L.A. Riots of 1992.

White supremacist Bannon - who also co-founded so-called "news" site Breitbart - was a Hollywood exec in the '90s. Yep. He produced films, wrote scripts, and made documentaries... and generally with a rather right-wing bent (he's been likened to Nazi propagandist Leni Riefenstahl).

But it wasn't always this way, apparently. Julia Jones, Bannon's writing partner for nearly two decades who describes herself as a "Bernie Sanders liberal", told The Daily Beast that he used to be a different kind of person.

"I never knew the ‘racist Steve’ that’s being reported now," Jones says, "I never heard him make any racist jokes, and his best friend was an African-American who went to [college] with him… I never saw even a hint of racism, but I did see this elitism… He would always look down on poor people of any colour. At one point, he told me that only people who own property should vote."

Jones also recalled a time when Bannon had gotten really into Shakespeare to the point he wanted to make Titus Andronicus, but in space. He actually co-executive produced the 1999 flick Titus starring Anthony Hopkins (it wasn't set in space).

But that's not all - Bannon wanted to make a film adaptation of The Bard's Coriolanus. Nothing too weird, right? Jones says to The Daily Beast that he wanted to "make a rap film out of it set in South Central during the L.A. riots."

It was called The Thing I Am and got a ways into the production process - they even staged a reading. There's even an excerpt you can read.

A poster for the reading includes an intriguing synopsis: "Coriolanus, the adaptation, will shed light on the continuing subversive effects of racial abuse going back centuries - from the mines of Apartheid in South Africa, [to] slavery, prejudice and brutality, to gang cultures and the growing disregard for the disadvantaged in society today... it will show how the culture of greed, elitism, discrimination, and inhumanity repeats itself today in a self-defeating replay of atrocities."

It all sounds very unlike present-day Bannon, doesn't it? This is the same Bannon seems to be working Trump like a ventriloquist dummy.

Read more about Bannon's Hollywood career on The Daily Beast.