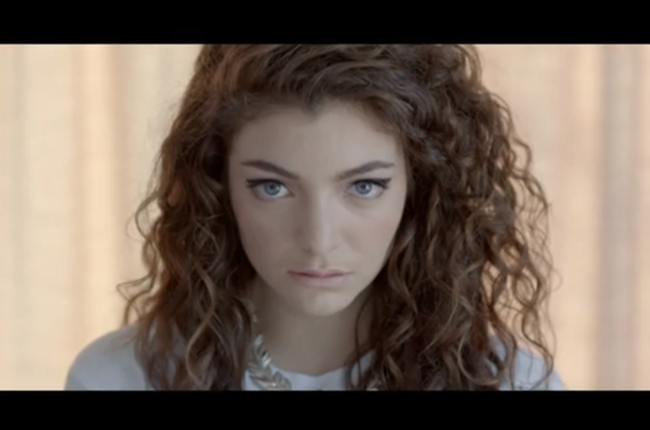 Is there anything specific that influences your lyrics?

It’s kind of hard to say, there are so many things! I use Tumblr and that’s a really good source of inspiration for me – I’m a visual person. Beautiful words or phrases I read or hear on TV shows will inspire me to weave an entire song around them – I’ll never write a song called ‘You and I’/ ‘Tonight’/‘Letting Go’ or whatever, it’s gotta be more random than that to keep me interested.

My friends inspire me hugely too, I think young people (younger than 18) are the most creative and inspiring people on earth… we should all hold the jobs that matter, because we know what’s cool. In social situations I’m always thinking about what I’m experiencing, trying to analyse and break down. I think too much, for sure. But it culminates in writing stories within these songs that really mean something to me, and hopefully to other people.

The inspiration behind ‘Royals’ is pretty simple – I was poking fun at the disconnection between the lyrical content of pop music and the content of my friends’ lives. We go to house parties because we’re too young for the club, and we drink terrible vodka which tastes like dust because it’s cheap. All my clothes are from charity shops and I get public transport, just like every other person my age, and it occurred to me how far from the crazy luxury we were.

‘Tennis Court’ was a really stream-of-consciousness thing. I wrote the whole lyric in one sitting, quite fast. It was just me thinking about everything crazy that was going on in my life, and wondering what would happen in the future. The tennis court is a place everyone hangs out in my neighbourhood, and visually it’s really powerful and beautiful for me. Writing ‘Tennis Court’ was my way of holding onto something familiar and personal which might seem far away as I start to travel and leave this little suburb world behind. But the song was also a little bit of rumination on me and my mates, on everyone being so jaded, and not caring. Call it teen boredom. And I was kind of clinging to a time when it didn’t feel that way, a kind of nostalgia. And the tennis court embodies that for me.

What’s your favourite song of yours? Why?

There’s a track called ‘Ribs’ on the record which I wrote in February. It’s about getting old. It’s fun.

People have been saying that you’re critical of the high life. Is there any truth to that?

People can live however they want! In ‘Royals’ I was just being a bit of a smartass – criticizing how that high life is kind of all anyone talks about in pop music now. The lack of relevance is what I’m critical of. But put it on record that I’m totally cool with people who live in the Hamptons and own Ferraris and shit. I’ll probably have some money soon, and get called a hypocrite. That’ll be interesting.

You’ve expressed dislike of the way young people are perceived. What’s your opinion of the representation of youth in the media?

I just feel like the young people who are supposed to be representing young people are pretty bad. Bieber and everything, no-one my age actually cares about him. It’s such a Disney thing, a cartoon character idea of being a teenager! People are always accusing teenagers of being on drugs and fucking up their lives, which is true to some extent… But we’re allowed to do that, we’re not supposed to have our lives on track just yet. Teenagers are a lot more switched on than people think.

Do you think the way women are presented in the media needs to change?

I could fill your entire publication with this one, haha. I’ll just say that there are some strong, incredible females like Grimes and Lena Dunham and Tavi Gevinson who are such inspirations for girls and for feminism, and they’re pioneers for change in this decade for women. Holla, gurls.

Do you consider yourself a role model?

If people considered me to be a role model, I would be honoured.

How do you feel about Lana Del Rey and Marina & The Diamonds comparisons?

I’m a girl, and I make pop music, and I guess I have quite creative lyrics, so I get compared to other girls who make pop music and have quite creative lyrics. The only way to set yourself apart is to keep doing your own thing, and eventually people will realize you’re an artist, and what you do is something original, and genuine. I think both those girls have some interesting aspects to what they do, though.

How did your exams go?

Haha, I’m actually a total nerd with schoolwork. I did well. Not going to brag though.

What have you got planned for the rest of the years?

Not getting pneumonia. Finishing off my record. Sleeping for a week. Working my ass off to support the record. That’s about it.

The Love Club EP is out now.