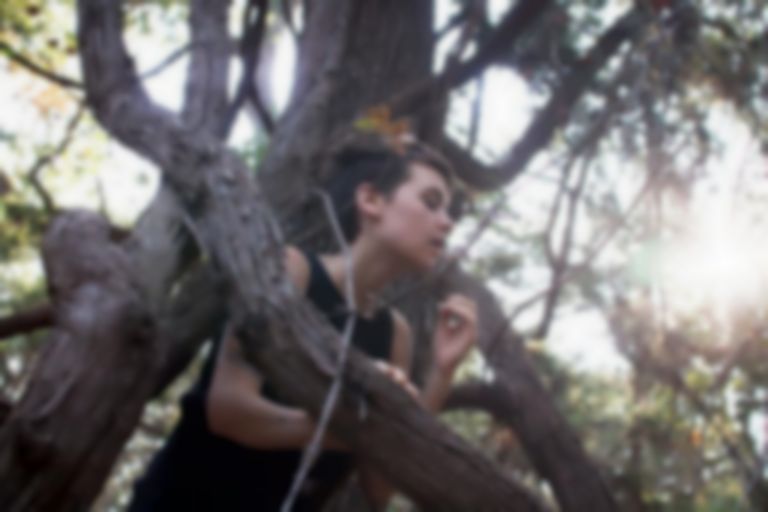 A week today sees the release of Wabi-Sabi, the second album from Cross Record. Today, though, you can stream it exclusively here at Best Fit.

The follow-up to 2013's Be Good long player Wabi-Sabi, named after the Japanese aesthetic of imperfect beauty, was record by Emily Cross and her husband/band member Dan Duszynski at their Moon Phase ranch in Texas after initial outlines of songs were formed in Chicago and finds Cross at the intersection of her musical and artistic sides. We've already heard a few tracks from the record including the fuzzy and menacing "Steady Waves" and the fragile beauty - fragmented, it has to be said, by piercing riffs and pounding drums - of "High Rise". The rest of the album follows in a similarly stunning fashion, a balance between the vulernability provided by Cross's heavenly voice and the sinister, trouble-hinting musical backing.

We spoke to Emily Cross about the making of Wabi-Sabi and you can stream the album exclusively and in its entirety after our conversation.

Given that some of the writing took place in Chicago and the recording at the rather more remote Moon Phase ranch, what effect does place have on the sound of a song,or is it more psychological than just the way a chord on the guitar is struck? Can you tell in advance how a place will change a song?

I really don't know. I mean, I'm sure place has an effect on the sound of a song..but I'm not sure that I am conscious of it at the time. Of course when listening back I am transported to that place...and even how I was feeling in that environment at the time.

You studied art and it has an influence over the record and in the album title...is there a Venn diagram somewhere which shows this overlap and how one informs the other?

It's more like a fish tank. There are some art fishes and there are some music fishes, and they are swimming around in the fish tank all day.

You've worked with Swans drummer Thor Harris, a number of female voices and your husband this time....what does each bring to your sound?

My husband Dan brings a clean pop sensibility. His baritone guitar sounds badass. Thor provided marimba, kalimba, and the mysterious black box. He came in like a big hairy magician, adding some truly special moments. As for the ladies' choir...I've always wanted to sing in a choir and knew I wanted to integrate some of that into the record. I originally wanted to write more material for us to sing together - maybe next time!

There are a few artists mentioned in your PR [David Hockney, Steve Reich] and most are minimal both in sound and vision...does that carry into your own sound?

I'm not sure I would call our sound 'minimal'. I do love minimal sounds and visions, though.

What's the idea behind the scorpion artwork?

One night Dan called me into the studio bathroom to show me these two scorpions holding hands (pincers) in the tub. I took a photo with my iPhone and then smashed them with a mallet. I feel bad about killing them, but I was also afraid of them. Dan and I are both scorpios, and I like to imagine us as those two scorpions in the bathtub. One day someone is going to come along and smash us with a mallet.

Given the album title Wabi-Sabi, if we remove imperfections from what we create do we lose the beauty?

Not necessarily. Plenty of perfect things are beautiful, like those wax food displays.

Wabi-Sabi is out 29 January via Ba Da Bing Records