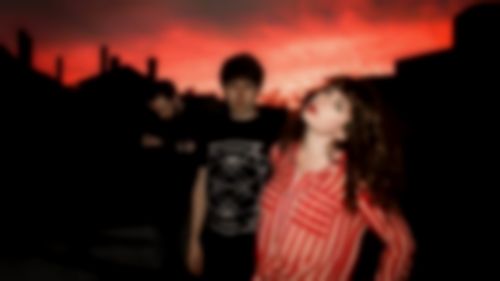 There are certain tracks out there in the musical ether that are just down-right perfect for cruising through dense concrete jungles at night. Nicolas Winding Refn, like a truffle hog snuffling for the richest delights, managed to ferret out the best of this style with the help of Cliff Martinez and Johnny Jewel to create the soundtrack to his 2011 film, Drive. Dublin trio Sleep Thieves also manage to capture this mood perfectly, with their new single “City of Hearts” nicely sitting alongside anything Jewel has laid his mitts on.

It has a real retro vibe to it; the product of that dancefloor darkness that Giorgio Moroder perfected way back when given a modern sheen. Dark, airy synths, which at points are reminiscent of the shakuhachi flute intro to Peter Gabriel’s “Sledgehammer”, glide under the brighter, twinkling synths, while Sorcha Brennan’s bewitching vocals, part Sarah Barthel from Phantogram, part that ethereal vocal track on most Porcelain Raft songs, float through.

“City of Hearts” is the very definition of noir-disco: dark, almost malevolent, with a cinematic tinge to it. Listening to it, you can just feel the night air whip past your face as you drive through the empty streets of a dark brooding city – the streetlights your only light, this track the only sound you can hear.