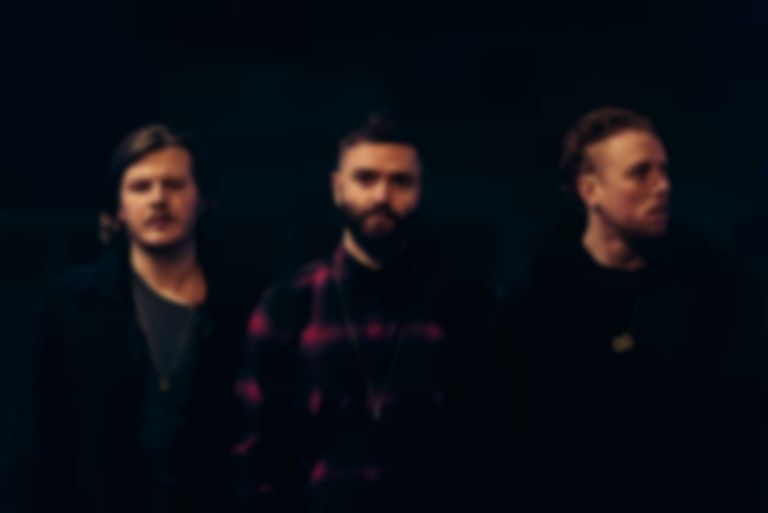 We have always loved albums with instrumental intros, serving as a gentle gateway. We made this in an afternoon at Big Jelly Studios in Kent. With the help of our engineer, James Mottershead, we placed EBows on piano strings and mangled harmonica sounds to create an ambient intro.

"Heavenbound" deals with the loss of a friend. More specifically it is an acknowledgement of the different journeys associated with death - the unknown nature of the journey for the person we've lost, and the uncomfortable journey for the people left behind. Although it's a bleak subject, the song ultimately has a positive message - there's a hopeful vision of death as an escape to another realm. The bare bones of "Heavenbound" were laid down in Melton Mowbray at our friend's studio as Stevie [Red McMinn], Al [Mitchell], and I jammed together.

Soteria is a Greek goddess of salvation.

Lyrically, it's a realisation that my character and morals have devolved, and that I'm not as good a person as I thought I was, or I'd like to be. I'm asking Soteria for her forgiveness for the bad things I've done in life, but also recognising that I might need help to avoid the pitfalls that lead to making bad decisions in the future.

"Hamburg" was written just after a breakup. It's strange looking back on relationships that didn't work out - one minute you can be very close to someone, but then the next minute they can be discarded from your life. They have become just an ever-fading memory, alongside the other people to whom you were once close. Personal relationships can very easily be brought down if we are selfish and allow ourselves to be distracted ("you flew too close to the sun"). The song started with an acoustic guitar line of Stevie's, over which I laid the production and vocals.

In 2016 I was fortunate enough to visit Bhutan because my girlfriend at the time knew a lovely family out there (the Dorjis). It was an incredible journey, and we met many monks in many monasteries and Dzongs. While undertaking the Druk Path Trek, having been shown how to meditate in a particularly otherworldly monastery at the top of a mountain, I had a very surreal experience/series of visions.

There are no lyrics in "Bohemia". As pretentious as this sounds, the vocals are a call to the Aether to allow me to experience what I saw at the top of that mountain once more. When it came to building on the bare bones of the track we thought it deserved something extra. Charlie, our manager, suggested we ask Huw White to arrange a lush string score, which we recorded here in London at Kore Studios.

"Kenobi" is an ode to Ken Thomas who helped us with this record, and a nod to the fact that his engineer, James, calls him 'Obi-Wan Kenobi'. This was a potential outro for "Bohemia" but we decided to turn it into its own entity.

As well as being the surname of the family I stayed with in Bhutan, a Dorji (or Dorje) is a thunderbolt that represents enlightenment. The actual song is a search for personal spirituality, and asks whether it is possible to be content with whatever form of spiritual enlightenment we find for ourselves, without committing to the doctrines of a religion. The bulk of the song was written at the same time as "Bohemia" when we were writing all in one room together.

"Hex" is the other breakup song on the album. It deals with escaping someone's spell.

"You peeled your skin from mine, you knew it would be the last time..." refers to how for every breakup there is one singular moment that was the last time you were physically close to the other person involved. Sometimes you might be aware that that was going to be the last time, other times not. This song was recorded with engineering legend John Cornfield in Cornwall.

This is "Anacrusis"' second incarnation. We released the original on the Hex EP. We started the song in Melton Mowbray, recorded the original version in Cornwall and this version in Kent. We later added strings in London. It’s a dedication to the people that help us through the hard times. Things can be going badly in certain areas of your life, but with the help of the right person, we can realise that everything is okay.

As many of our songs have done in the past, this started with a guitar line of Stevie's. Like most people, I have a fascination with space and the complexities of the Universe (most of the time I'm just struggling to comprehend its size and how irrelevant our planet is, and therefore how irrelevant our lives are).

Tucana is the name of a constellation - I was reading about it just before starting on the production and vocals of the song and it was only intended as a working title. As we decided to leave the vocals totally rough and unrefined, we also decided to leave the name as it was. Usually I refine vocal melodies, and rewrite lyrics until I'm completely happy with them, but this time all the melodies and harmonies are first takes from the demo, and exactly what came from brain to mouth without any forethought.

We released "Starliner" on our first ever EP, Life Size Ghosts. In those days all the recording and production were done in my bedroom. "Starliner" started as an electronic creation on my laptop, but as we have evolved as a band, together we developed the song into a stalwart fixture of our live set, and it has now become "Starliner II".

"I am the wicker man, I scorch the skies under which I stand."

We wrote "The Electric" at a time of global political turmoil in 2016. It’s a reflection on how man tends to find a way to destroy that which is good. At the same time, the song deals with a personal quest to rediscover faith in something bigger than ourselves. When I was younger, although I didn’t know who or what I was praying to, when I used to pray I would feel an electric tingle through my body that is very hard to describe. This feeling has weakened somewhat as I’ve become older - maybe I have lost my innocence and my spirit has devolved ("is it too late for me?").

Humankind has always sought answers to the existential questions of 'why' and 'how'. Through science we’re coming very close to answering the 'how', but the 'why' remains a mystery. "The Electric" deals with this perennial human search for answers. The song was a lot of fun to record and saw Al’s drumming reach new levels of excellence, driving the song all the way to the end.

Guy Burgs is a very interesting man. Those curious should check out his website. His words are very simple, yet they carry a great deal of meaning in their simplicity. Because some of the themes of the album are fairly heavy and occasionally bordering on bleak, we wanted to end the album on a positive note; "Somebody asked me, 'Do we all have inside us that pure part, that pure consciousness?' The answer is yes."

Aetherlight is out now via CRC.