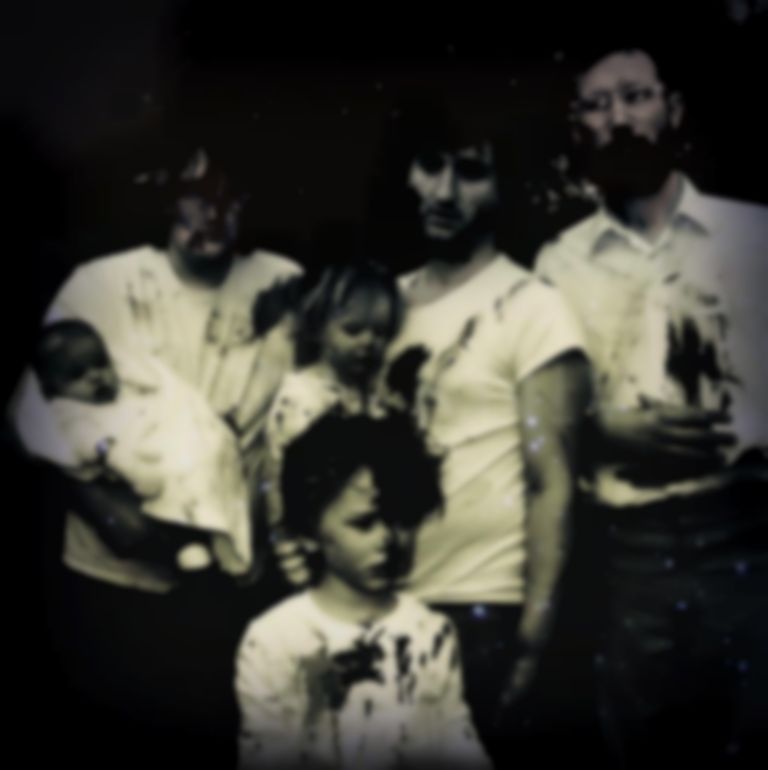 With this year’s Sick Octave, the Young Knives might have finally discovered the vein of individualism they’ve been seeking all along – eschewing the trappings of major labels and Mercury nominations for their independent spirit.

Turning to Kickstarter, to build a record with the fans, they promised a slice of the band at their purest, weapons-grade elemental state. It’s as witty as ever, but by wearing the band’s inherently loony personality more broadly on its sleeve, it manages to hit a new sonic tangent that’s totally engrossing at its best. We got the full run down of the inspirations behind the record from the band themselves – from Bagpuss to Billingsgate Fish Market to the “best song we’ve ever written”.

My kid started shouting down the talkback microphone in our studio and I recorded it for a laugh. Then he just kept singing along and I kept recording it over and over. I guess we just thought it reflected our approach to the record, just pissing around in the studio and not giving a shit what anyone thought.

It’s an episode of Bagpuss. The story in this episode is about how the Owls of Athens once had a beautiful song and everyone loved listening to them, but they get smug and complacent and they start charging too much for people to listen, so the Moon strips them of their song and gives it to the Nightingales who are much more left-wing about the whole thing and sing to everyone for free. This track is about heavy Synth drums and Starlets growing old. I like tracks that are just the same riff all the way through – a bit like “She’s Attracted To” was.

We Could Be Blood

This is the song on the album. I always wanted to do a Tin Pan Alley style, 2 minutes 50 song. I wrote this song sat by the washing machine. The title sounds a bit like the title of the film “There Will be Blood”, but by the time I realised that I had already written it so it was tough. It was almost a really indie song so we were really down on it for a while, but then we realised it was probably the “best song we had ever written.” The Hammond organ on it is Steve Winwood’s. We were at his studio and asked if we could borrow it. Because we are not very good at keyboards I played the left hand and Tom played the right.

I wrote the music for this song while I was watching a documentary about Billingsgate fish market, but the lyrics I wrote the day I sang them. I knew it was about heroes and the split second decision that makes someone really normal and boring into a national treasure, just because they accidentally end up in a position where they face death. Its about the love of military prowess. I didn’t really decide whether it was a bad or good thing. The music is all about the bass line in the verses. We wanted to get a bass pedal called a Woolly Mammoth that costs about £300, but that was too rich for us so Tom bought all the bits off eBay and made his own pedal for £25. It sounds fucking brilliant.

This song didn’t really come out like we expected but it was a good experiment. We found an old gas canister and a pulley system of the farm near my house, which sounded great when you hit them with a hammer. We knew we wanted to do a song with a drop-D tuning so it was heavy. Almost a bit like “Song 2″ but more Big Black. I’d been listening to the Breton album too and I liked the bits where the beats all drop out and you get more of a dreamy sound scape, so I nicked that idea. The lyrics are kind of made up, I wrote them as I sang them. It’s a dream-like mix of both White Sands I could think of, the ones in Ibiza with a load of “the youth” on drugs fucking each other, and the ones in the Middle east with a load of the youth trying to homogenise another culture. But there is no real intellectual thought gone into it, it’s just a bit of fun.

This song was totally stolen from a Dance/Pop act with shit hair and is often in the top 10. I liked the dynamic of his dance based pop song, and then I heard someone do a rock cover where the big dance drop was made into a metal rock out. I thought it would be cool to do that, but also add a dance hall beat and as many horrid nasty synth noises we could find. This is the first track we used our handmade synth we called “Sick Octave” on. The lyrics were about how humans can change so quickly from someone you knew into someone you don’t. My Grandpa died of Altzheimers and we watched him go from a Professor of Botany to almost a baby in about 4/5 years. His translation of reality was like a nightmare where he didn’t understand why a security guard at Sainsbury’s was grabbing him for shoplifting. It was a mix of real stuff, confusion, fear and covering up. I thought that that at least deserved exploring as a song, but not to be mawkish and sentimental about it, just to present it almost from as a POV computer game. You know something is happening to you but you have no idea what.

Me and Tom wrote this as we recorded it. There’s something about the Heaven’s Gate UFO doomsday cult that Tom wanted to do. But what we did was drank some beer, then dialled up some keyboard and drum machine presets and made up a song over it. The baby is a baby we had in the room that was crying because of Tom’s singing.

This song is about getting rid of all the shit in your life by just changing your attitude. It’s a real mess and from the reviews I have read so far no one gets it so I guess it’s probably my favourite song on the album. It’s childish mud rock.

This song is made from complete repetition, the drum track and the guitar track are just loops then we added stuff over the top. We used lots of old bits of metal to make cymbals and some field recordings from a Cold War air hanger to get big explosion sounds. Lyrically, we found a chapter in an old book about how to play a kind of generation game style memory game. There are some things in the game that meant a lot to me and there are some that are just from horrid dreams.

This is a pretend jazz track. We recorded it late night at Steve Winwood’s studio after a load of beer. I love records that are wrong. Everyone that tells you how to make records say “never says get drunk and play it badly”. I don’t know why because it really works. It was kind of inspired by Minute Men, Jad Fair and Steely Dan. It’s about living on the road, either in reality or just in your head – always thinking about the journey and the next horizon.

This was just a demo I made late at night. My wife kept texting me like “Shut up, it’s 2 am and you are singing” and “Be quiet you twat”. So I sang and played the guitar really quiet. I just recorded it with the mic of my Macbook and then used some plug in drums and synth. It was an idea for a song and the second verse is just made up. You can hear that I am making the words up as I go, but we thought we should just stick it on the record because it had a good mood. It’s also about getting fucked up when things are going badly and then when things go really well you celebrate by getting fucked up.

I realised recently that this title sounds like the film Bench Warmers. I think that film is about kids baseball, but this song is more about cheap sex. But it’s not serious. It has my favorite lyric of the album – “Warts and all as I walked into the haunted sauna, I don’tknow why but I felt like I owed it to her”. I don’t know what is happening there but it sounds great. This is Young Knives’ version of “Sound of Silence”.

It came to me in a dream. I thought the first two verses up in half sleep in my bed. The bass line was the most important bit. We tried to put this on our last album but everyone working on the record (apart from the band) hated it, so we didn’t feel like we could. In a way that was a good thing because I spent hours changing it and playing with it, and what really makes it is the keyboard stabs all the way through that totally change the song we originally had. What we originally wrote was a stupid track with a big beat four to the floor drum beat. But I think we managed to drag it into the Sick Octave vibe. It was always inspired in some way by Philip Seymour Hoffman’s character in Happiness -  the heavy breathing sex caller. He’s both a potential sex pest and a caring neighbour, he’s neither good or bad. I think that is a good feel for the record; beyond good and evil. Just like real people – really lovely and really sordid and selfish in the same breath.

Sick Octave is out this week, self-released by the band.