Today we’re thrilled to be able to offer up an exclusive stream and track-by-track guide to Look Out Mama, the new album by Hurray For The Riff Raff – the musical alias of one Alynda Lee Segarra. In certain respects, the ten tracks here are trad-country through and through, but with Andrija Tokic in the production seat (also responsible for Alabama Shakes album) and Segarra’s desperate throaty croon at the fore, Look Out Mama is delightfully authentic and consistently rewarding.

1. Little Black Star
This is a tune I learned from a John Jacob Niles recording, probably a children’s rhyme since he was fond of those. I changed it to have a swamp pop feel and we had a great time layering this in the studio. A lot of hand claps, foot stomps and “ooh wops” It’s about time we had a “feel good” jam, y’know?

2. Look Out Mama
Wow, two happy songs in a row! A big step for me. We were gonna have Sam Doores do double duty in the studio and play drums, then overlay a piano part. But a fella by the name of David Grant came in and layed down a Levon Helm feel on the drums. It really makes this recording for me! We did it all live, probably two takes at most. I was so happy with it, though I have been working on my yodel since then.

3. Ramblin’ Gal
I wrote this tune after listening to a Elephant Micah song called “Wild Goose Chase” He wrote it as a response to the Hazel Dickens song “Ramblin’ Woman”, and that song was in response to “Ramblin’ Man” by Hank Williams. I guess I wanted to continue the conversation through song, to hear the musician’s experience of travel from all different perspectives. I wrote it from more of a place that I was at before I found a path as a musician, I felt restless and lost. Wondering if i’d ever find a “home” or feel at least a little satisfied with where I was. Here it is to add to the game of telephone.

4. What’s Wrong With Me?
Sometimes you fuck up, and you gotta write a song about it. What better feel than a soul song for thinking you might lose it all? Dan Cutler and Sam Doores sing great backups on this one.

5. Ode to John and Yoko
I am obviously a huge John Lennon fan. I am inspired by him not only as a songwriter and musician but as a very opinionated person who believed in world wide unity and peace. I really respect Yoko Ono as a feminist and an artist. I wanted to write a song that told the love story about John and Yoko and about what I got from their work together. Though it tells a story, I am more interested in the effect I believe they had on American consciousness and the impact they’ve had on younger generations. I thought that through out time there has been too much negative conversation about the two together, they deserved a song about the good they tried to put out into the world. So this is kind of a thank you and my way of speaking to a hero that I will never get to meet.

6. Lake of Fire
My apocalyptic surf love song. I loved writing this song, and recording it was that more fun. That’s me on the guitar solo, and Yosi killin’ it on the drums!

7. RIley
Poor Riley Downing (of our longtime tour mates Sam Doores and the Tumbleweeds), this is not about him but I did borrow his first name. It’s such a poetic name, I hope he doesn’t get pinned for this one cause he’s a good man!

8. Go Out on the Road
I wrote this one long ago and played it with my old band Sundown Songs. We got to get real classic country in the studio with this one and we thought a lot about Patsy Cline production.

9. Born to Win (Pt. 1)
Part two coming someday! This is kind of an anthem, i wrote it with a lot of old friends in mind. Some aren’t around anymore, but they lived their lives on the streets and on the road and they brought me up and took care of me. It’s my song for all of those people, wherever they may be.

10. Something’s Wrong
Last but not least, we recorded this one on Andrija Tokic’s front porch during a thunderstorm and tornado warning. So there’s a lot of rain on this track. It’s my song for New Orleans, kind of a lullaby that was written after a very dark and traumatic period where there was a lot of violence in my community. I felt very weak and helpless, like there was nothing i could do to help anyone who was feeling so much grief. So i wrote this one, we recorded it on our first day in the studio and right when we finished a tornado siren blew (in key with the song!) and the power went out. We took it as a good sign. 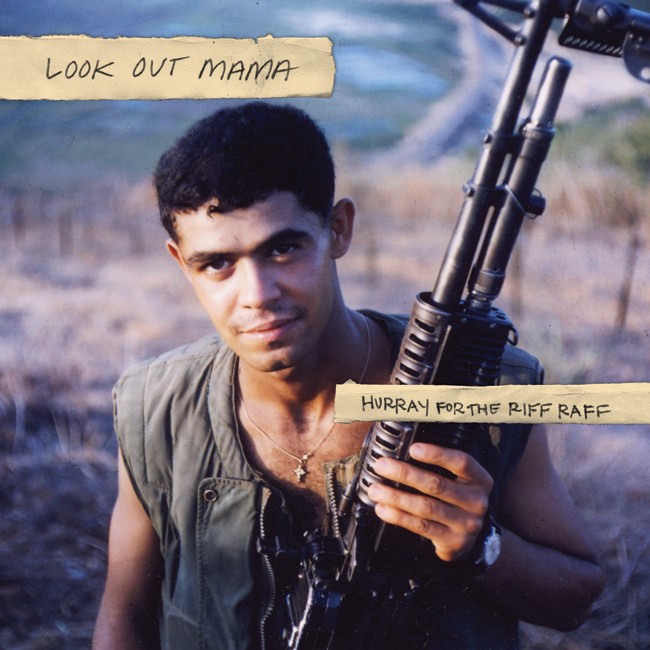 Hurray For The Riff Raff, Look Out Mama is out now via Loose Music. Catch the band live on tour across the following dates: