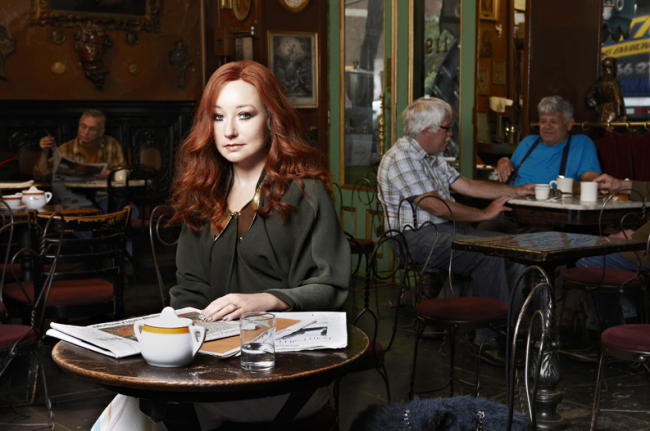 Best Fit: Is ‘Star of Wonder’ your favourite song from Midwinter Graces?

Amos:  No! It isn’t. But I love playing it with people. Originally, I said to Philly: I want gold, frankincense and myrrh coming over the desert on a camel, come on! Where’s my ’Kashmir’? I said, if I’m gonna have then I’m gonna do it to a Methodist hymn. I remember as a girl in the church… The Methodists said: look what Led Zeppelin is doing to all the girls! They thought I was a bit too young to be affected but – teenage girls? forget it! They were leaving home, going to concerts, their fathers had no control over them. You know that saying from the bible:  ‘gird your loins!’? Well, yeah, forget it – those loins are out the door! No Papa was gonna wrangle them back. So, listening to the music, it made sense to me, I thought it was so sensual. They were able to pull in the Blues energy with the Goddess mythology, that’s what Robert was doing. And, therefore, having a Middle-Eastern read for something that was originally a hymn? I couldn’t resist that! That’s why it made it onto this record. Because of what it is doing, what it’s bringing together from the church background, a reference to Zeppelin orchestration and a Middle-Eastern feel as well.

Best Fit: When you play ‘Winter’ live, is it still easy to tap into the feelings and emotions you had when you first wrote the song in the early 1990s?

Amos: Over the years, people have told me their stories of ‘Winter’. So many people. And so, when ‘Winter’ walks into a room, she is carrying stories of girls and their fathers from what seems like different dimensions. When I first met ‘Winter’ that doesn’t mean that’s when ‘Winter’ was born. It means that’s when I met ‘Winter’. It’s been alive for… heaven knows how long her structure has been in place. But that’s how I see the songs, their consciousness. And when I recorded this version with the orchestra, I wasn’t seeing me walking over the hill with my dad in Virginia, or falling off a swing and Papa, my mother’s father, picking me up. I was seeing Tash fall down in Vienna on the ice. We were out there visiting, walking around before a show, and she fell down on the ice. She was very little and Mark picked her up. She had just grazed her knee and was crying and the picture that I had was of Tash and her dad on the ice. I really found that to be a lovely transformation of the song.

Best Fit: You once said that ‘Honey’ was your favourite song from Under the Pink even though it was not actually on Under The Pink. Similarly, for many fans, ‘Flying Dutchman’ is the best song from the Little Earthquakes era even though it didn’t make the final cut. Was it meant to be on it?

Amos: It was. And it was a heart-breaker when it was taken off. And that’s why she is having her time again now, twenty years later. Obviously, because it is a Dutch orchestra, ‘Flying Dutchman’ naturally showed itself and said “look, it is my time”. Also, Comic Book Tattoo happened [this was an illustrated collection of stories curated by Amos and Rantz Hoseley] and the title is a lyric from ’Flying Dutchman’. I wrote that about all the young boys making comics at the time, whose parents said that they were wasting their lives. Rantz was a young guy who would crash at the Hollywood studio apartment behind the Methodist Church when I would go and stay with my boyfriend at the time, Eric Rosse. That song is really coming to her own in the 21st Century with Comic Book Tattoo and now with the Dutch orchestra so she’s having quite a career. She blossoms late but she’s having a ball!

Best Fit: In the battle of the short Tori Amos songs, how did this one beat ‘Mr Zebra’, ‘Way Down’ or even ‘Hungarian Wedding Song’ for a place on the album?

Amos: The thing about ‘Programmable…’ is that I really thought the arrangement could be fun and that we just needed a bit of fun. ‘Mr Zebra’ is a big love for people, I know that. It was considered. I did it with the Black Dykes on Boys for Pele. What I thought was that it would be just big fun to have a big orchestration of ‘Programmable Soda’. We had a good time doing it.

Best Fit: OK, this one has had quite a bit of a journey, hasn’t it?

Amos: Well, you know, I don’t think we got it really right until the orchestral version. I think that I was playing around with an approach in 1997/1998 and by the time Tales of a Librarian came round I thought about holding it for the next record, which became The Beekeeper. But Matt , Jon and I had been playing so much on the Scarlet tour that I think we just wanted to play music that we hadn’t played together before. That’s why it was there, it was just this little whimsical song that we were fond of. So the think tank said “why don’t we put it down”. And over the years it’s been one that people ask me for and it’s been overlooked in some ways, I guess, because it didn’t make a record… you know what I mean . So it stood up and said “I’d really like to come and play with the Dutch orchestra, please”.

Best Fit: Can you, after all these years, shed some light on the lyric: “Tuna / rubber / a little blubber in my igloo”?

Amos: I think I need to leave that to you. I think whatever you think is valid.

Best Fit: Has writing, recording and playing the song live over the years been a cathartic experience for you, in terms of dealing with its subject matter?

Amos: Well… what’s happened over the years is that many people have come up and told me their story about their Marianne. Someone in their lives left the planet early under circumstances that just seemed wrong, that didn’t seem intentional, it was always questionable, you know – those accidents that can seem questionable. I see my niece who is now 20 and Tash is 12 and… Marianne died when she was 15! So, you know, 15 to me is so young to leave the planet – you are just beginning to live. It has been my dedication and tribute to the magical spirit that was Marianne. Her death has informed me and taught me and I feel her presence and she’s walked with me. They say the ancestors walk with you and she is the spirit sister. And so many people around the world have their own Marianne and that’s why she made it onto the album.

Silent All These Years

Best Fit: In 1997 you re-released ‘Silent All These Years’ to raise the profile of your charity, RAINN (Rape, Abuse & Incest National Network). What do you make of the current comments by people like Todd Akin and George Galloway about the definition of rape, in light of the Julian Assange case?

Amos: I don’t know if we even want to dignify it but saying that the sperm would know the difference? And that there couldn’t be a child born out of rape… when you think that somebody can be running for office and that they could make a women’s issue into something that makes no sense! That was a wake-up call for the women of the world that we have to vote! We have to stay present, we have have to be aware of what these people are saying! ‘Silent All These Years’ has been a song that… women have come up to me, even recently, and from all walks of life: women that might seem very powerful and who have jobs where they wield a lot of power, doctors, judges, producers… and yet they might have been involved in a domestic violence situation or a verbally abusive relationship and they weren’t able to draw those lines. And they said that eventually with therapy and making friends with ‘Silent All These Years’ and finding the strength to confront these things, they began to change their situations. It’s a song that is very much there with me.

Best Fit: On American Doll Posse, you took on the roles of five different women. ‘Girl Disappearing’ was sung by the character Clyde. By re-recording this song as well as fellow-Doll, ‘Programmable Soda’, does it feel like you are essentially doing a cover version?

Amos: I guess so! I guess they’re both cover versions, in a away. And also on the road I did a version of ‘Smokey Joe’  with the Quartet but it did feel like that… I have to shift it into a more integrated being. And those women aren’t far away. They’re extensions of the self. But ‘Girl Disappearing’, when I do it as Tori rather than Clyde, isn’t directed at the self, it’s directed at all women. The idea that any woman can be standing in front of another woman and yet we don’t recognise each-other or acknowledge each-other’s spiritual paths. There is a lack of compassion sometimes between women. ‘Girl Disappearing’ made sure that she made it, she commanded to be on. She made it on this album in the last minute, by the way! She said “I’m not going anywhere! I, ‘Girl Disappearing’, am appearing here!” .

Best Fit: This is a bonus track on Gold Dust and, in a way, has some thematic link to ‘Marianne’…

Amos: I felt that it’s not only young women who experience this and it was important that mothers… you know, the idea of being marginalised and that people would be better off without you…

Best Fit: If I understand the song correctly, you are saying to a mother, don’t kill yourself, people need you and there’s more in this world for you.

Amos: That’s right. And this decision might look right to you now but we need to change what you’re looking at. Take my hand and we need to look at your life, ten years, twenty years, thirty years from now and how without you so many people that you love will suffer.

Gold Dust is out on Deutsche Grammphon on 01 October. Tori Amos and the Metropole Orchestra play the Royal Albert Hall on 03 October. Tickets are available here.