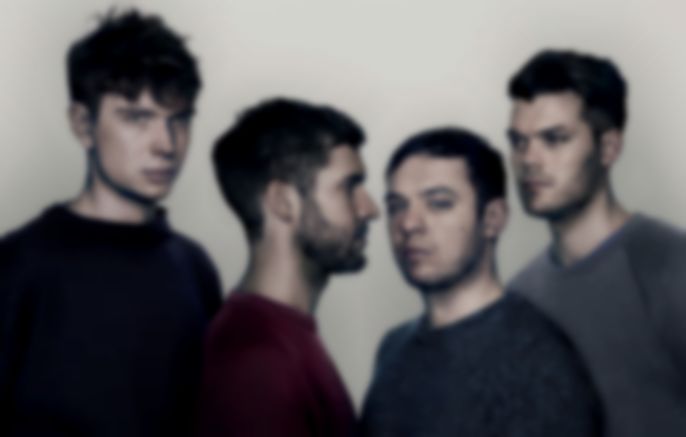 Everything Everything‘s Arc is an album to really sink one’s teeth into and – by the band’s own admission – one which provides a much more expansive and less cluttered song palette than their debut Man Alive did.

The quartet’s particular style of choppy sounds, erudite verbosity and rich arrangements has divided opinions, to the point that they could be referred to as a bit of a Marmite act. For those who are open to their sound, they are the more ambitious forebears of faves-du-jour Clock Opera, Django Django and Alt-J. For others… they’re not. But the four Mancunians revel in this dichotomy and from meeting them, the things that come across most strongly are their passion for their craft, their absolute dedication to their songwriting and their self-awareness.

We sit down with Jonathan Higgs, Jeremy Pritchard, Michael Spearman and Alex Robertshaw for a detailed discussion about Arc‘s eclectic track list, so as to provide you, the listener, with a listening companion for an album which they are, by all accounts, extremely proud of.

Jeremy: I was worried that it was kind of what people had expected form us. In a way it’s the link between Man Alive and the more mature parts of Arc but, actually, the response was that we’d honed things a bit and that it was more concise. A bit more verse-chorus. But it still sounds complex to most people, I think. We just thought we’d put it out and dip our toes in the water and build a bridge into the next record. The response has been way better than we could have imagined.

Jonathan: There were more elements to ‘Cough Cough’ in the original demos and we stripped it out a bit.

Michael: We wanted it to be a bit more characterful and by that I mean memorable – and wanted it to have hooks. We weren’t necessarily obsessed by that but we wanted to pack a lot in there. I guess it’s the same with people like Xenomania.

Jonathan: But we didn’t want to do much hanging around, we wanted to get to the point quickly and be concise with it as a pop song. We are, more than ever, aware of the radio ‘chop-down’ that has to happen. You don’t want to be too long with something that might be a single. You want to try and make it concise.

Alex: But we really didn’t expect the kind of attention that it got.

Jonathan: It’s one of the more Man Alive clusterfuck songs in some ways. It’s about turbulent relationships and feeling alone even if you are with somebody. It’s playing off the Lone Ranger and his relationship with Tonto. The fact that he’s the Lone Ranger despite – well, he’s always been Tonto. I always thought that was funny and a bit weird. And I liked the language: Yippeekayay and Hiyo Silver and Kemosabe.

Jeremy: It was the first thing that we wrote after Man Alive. So it’s still in that world, really. Well, lyrically and vocally, at least.

Torso Of The Week

Jonathan: ‘Torso Of The Week’ is inspired by the many exercising folk of Manchester. I was going to the gym a fair amount and I would go at night quite often, sit there on my bike or whatever and obviously your mind wanders because there’s this terrible, terrible music in there. And I was listening to Scott’s Journey to the Antarctic and just looking at these people like zombies on their treadmills. I was thinking how weird it is that in this day and age we come into a room to use our bodies. You have to set time aside to use your body. It got me thinking of the balance of work-life and the lure of the bright lights and some kind of story in my mind of a woman who is struggling to stay on top of things with all the stuff she has to deal with. A treadmill woman just going and going and going. It struck me as a sad struggle in some way.

Jeremy: It’s not meant to be spiteful. It’s sympathetic. All these external pressures that are put on women, especially to be thin. We’re not saying everyone should be unhealthy. We all have to go to the gym from time to time but the title comes from those magazines that put pressure on people to go to the gym.

Jonathan: And also I wrote it being in the gym myself. I’m in the gym, for God’s sake. There’s a torso of the week sitting in there in the magazine and that’s not me.

Jonathan: Something I have wanted to do for ages is to write an orchestral, sort-of ‘Eleanor Rigby’, quartet song. And it got a bit out of control. We slaved for ages on it. It was originally just orchestral with a far more electronic accompaniment but we really worked hard to try and get the rest of the band involved in it -

Jeremy: That was something we didn’t work on at all before we went into the studio. There was no live arrangement.

Jonathan: But I thought this was the best thing I’d done and that I really didn’t want it to be just me. I thought this could be a single and so everyone else has got to be on this. So we worked really hard to find a place for the band on it. I think we definitely got there in the end with the arrangement. I’m really, really proud of that tune.

Jeremy: I think we are – us, three – kind of the sides-men on that song. And we’re perfectly happy to be, really, because the strings arrangement is central to it. And if you take that away we’re not really contributing much. The beat is important and that was vital – finding the right thing for Mike to play, a happy back-beat .

Michael: We’d had the demo and had talked about it a lot but never actually sat down and tried to play it. It was the one I was most nervous about in terms of capturing the right spirit but in the end I think we got it.

Alex: As a whole, I think ‘Duet’ is the most poppy of the new tracks.

Jonathan: ‘Choice Mountain’ is essentially about depression and feeling like there’s no point in doing anything or that you’re not going to achieve anything, I guess. I’ve always been fascinated by the fact that all animal embryos are the same and then they turn into elephants or dolphins or whatever but there’s that point where they’re all the same and all have the potential to be ‘the thing’. The story is one of those… a fish egg just drifting along and thinking what am I going to be? Am I going to be the dolphin of your dreams? I could be a lion or a whale. But I’m probably not going to. Just drifting along in the darkness.

Jeremy: It’s quite a dense allegory…

Jonathan: A metaphor of… you’re not going to achieve anything and just carry on undeveloped.