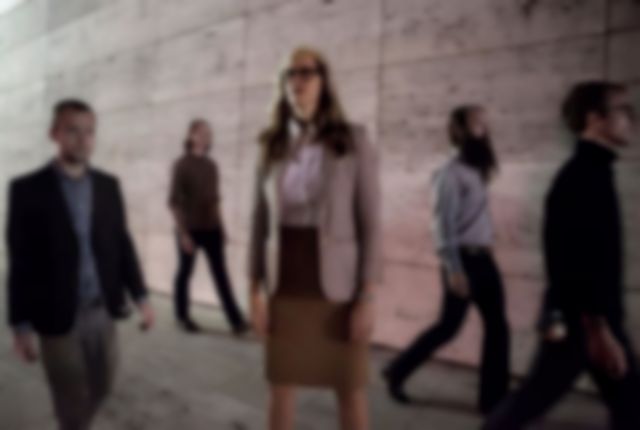 Since the release of their acclaimed second album Wild Go last year, Dark Dark Dark have spent their time touring, making friends and acquaintances on the road, sharing their love of creating music and working on Who Needs Who, the collective’s latest album, released on Monday through Melodic.

Again proving themselves to be the masters of the art of combining time, place and sentiment in each of their carefully considered, delicate tracks, we asked Dark Dark Dark’s leading songstress Nona Marie Invie to tell us about the stories and inspiration behind each of the tracks from Who Needs Who. So read on to find a personal account of the album’s creation and to hear an exclusive stream of the album ahead of its official release next week.

I had the melody of the chorus kicking around in my head for months before the rest of the song came together. I remember singing it in the shower in portugal and while riding my bike in minneapolis. It’s a sort of riddle for me. I was thinking a lot about that owl in the Tootsie Pop commerical. How many licks does it take to get to the center? And then cutting through anyway. Who’s doing the pulling and pushing? and what do I have left when I stop playing that game.

This song was really fun to write. It changed drastically from when I first brought it to the band, and it felt like such a nice collaboration. I love to create a dream world and live in it. Or better yet, dream about living in it.

I was having some difficulty writing, so I made up an exercise of picking some of my favorite songs and trying to write them in a new way. This one started with me listening to Joni Mitchell’s “Last Time I Saw Richard” and lead to me thinking about a sweet winter moment with a friend I hadn’t seen in a while. We really do talk a lot about Roger Miller. and about things that are actually so true, it can be devastating.

I wrote this song in some form many years ago on the ukelele. The verses changed quite a bit, but the chorus always stuck with me. An homage to good women gone.

This is another one that took many forms and changed drastically over the months. It all started with that bass line, a nice slow rambler on the piano. But adding the accordian and the bass totally changed the tone. Along with many different sets of lyrics. I love the reverbed out banjo and accordion.

How It Went Down

This is the only song on the record where I don’t play an instrument. It’s so nice to be able to to just sing and let the simmering cymbals and piano plunks and laid back banjo really sink in. Really puts me in a good groove, this one.

This song came from not being able to satisfy someone’s interest in why I was behaving in a certain way. And how I was, at the time, pretty much unaware of my motives. A secret even to myself. The choir vocals at the end are so powerful.

Sometimes it’s hard to get the words out, especially if I feel like they aren’t being received well. The words “hear me” were cycling through my brain constantly around this time. They needed to get out. I love the epic drums and the choir vocals. What started out as a simple song turned into something so lush.

Meet in the Dark

Another track about groping around in the darkness of our minds, unclear of our intentions, trying to figure it out and find our ways. And understanding the most important thing among all the uncertainties and vagueries, something I know to be true is that I’ll always be singing.

I started writing this song while I was riding my bike in New Orleans. It just wrote itself by the time I got home. I’m so happy that everyone in the band sang, I love a wall of harmonies.

Who Needs Who will be released on 01 October. Pre-order the album via Melodic now.