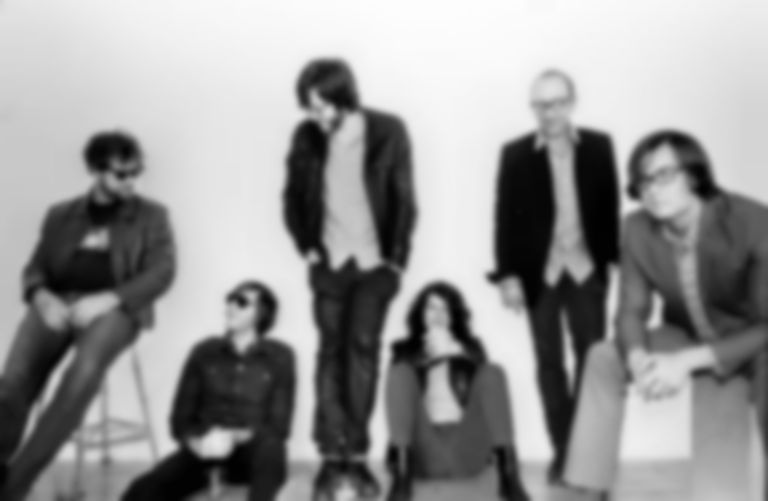 It’s taken fifteen years and seven albums, but it seems that Will Sheff of Okkervil River is finally ready to talk to us directly. Across records like Black Sheep Boy, The Stage Names and I Am Very Far we’ve heard Sheff and co. sing of Tim Hardin’s heroin addiction, pop culture, porn stars, Jobriath, John Berryman and various other touchstones. Always lyrically fascinating, even when hiding behind characters and scenarios, Sheff’s work with Okkervil River has been variously dark, ornate, triumphant, sad and affecting; the brilliance of the run of albums from 2002’s Don’t Fall in Love with Everyone You See to 2008’s The Stand Ins is hard to match in its genre; songs so catchy, touching and quite frankly educational, given the variety of literary and musical references, that it’s hard to believe the weight of what Sheff packs into a single song.

Yet following the mildly disappointing (by Okkervil River’s high standards at least) I Am Very Far, Sheff has dropped the characters and story telling in favour of making an album that’s his most personal and direct to date. The Silver Gymnasium is set in 1986 in Sheff’s home town of Meriden, New Hampshire. At this time Sheff is ten years old and discovering his creativity, and we follow his development across eleven incredibly direct and unfussy (for the band in any case) songs that come from Sheff’s experiences as a child, and from looking back on his growing up in a very rural and remote environment. The concept seems to have invigorated Sheff and the band; they’re on fire throughout (and joined once again by old pal Jonathan Meiburg of Shearwater) this immediate and immediately rewarding record. It’s instantly recognisable as an Okkervil River record – which can only ever be a good thing. After the opportunity to discuss The Silver Gynmasium with singer Sheff recently arose, we jumped at the opportunity, to disocver him to be as engaging and open an interviewee that I’ve had the chance to speak to.

Despite writing songs that Okkervil River fans have attributed to Sheff’s personal life (more of which later), this is actually the first time Sheff has written clearly and directly about his own life. So, seven albums in, what’s finally brought about the autobiographical? Sheff explains: “About the time we were just starting to work on music there was a big, strong kind of sappy, self-indulgent autobiographical trend in music – and this was something I was not into.” What exactly turned him off it? “It felt really adolescent,” explains Sheff. “So, around that time, I was feeling very strongly like music needed some distancing from that, and it was important to write as a writer and not necessarily spill your veins on the page, as it were.” I ask what it is specifically that turns Sheff off about those types of record. “Now the world has shifted quite a bit in that direction – to the point where what I hear in song writing now is a kind of lazy disconnection from urgency. It seems like there’s a lot of writers now who use very emotionally charged, elemental language as a shortcut for actually saying something that’s personal. I feel like they get….sort of archaically simple with this pointed and general vague language. You’ll think it’s meaningful, and that’s good enough for them.” It must be tricky, then, for the Okkervil River front man to avoid the same pitfalls, so I ask what separates his approach to songwriting. “I felt like in a climate like that it was more important to actually put something on the line,” begins Sheff, “so for that reason I decided I would write in a very straightforward and personal way. I kinda feel right now that rock writing is…there are not a lot of people putting a lot of stake into what they’re doing.”

Something I’ve pondered over personally is how to make a great confessional record that resists becoming bogged down with “woe is me” sentiments and an unwelcoming misery, so I ask Will – how did he avoid that with The Silver Gymnasium? “I think it’s really easy to do a terrible version of that!” he laughs. “I think it’s really hard to do an artful version of that, so that’s kind of a challenge.” Are there any records he thinks manage to avoid being self-indulgent? Sheff picks a relative classic: “For example, if you listen to John Lennon’s Plastic Ono Band - that’s a great confessional record that’s very direct with the listener. It’s not artful, it’s very homely and plain and you really feel like John Lennon is revelling in all that – and I love that. “ And does he care to mention any of the sinners in the genre? “When you listen to…there’s other artists who do the confessional thing in a much more inflated sort of ‘poor me’ way, and I really don’t like that stuff. But I do like the challenge of attempting to do the more noble, and simple, and brave version of that.” Which is? “Which is to look the listener squarely in the face and say ‘hey man, this is where I’m at and I’m gonna talk about it for a second’. That to me feels like putting all your cards on the table, and just sitting down with someone feels like the cool approach to take. Especially now when I feel like that sort of directness has gone out of writing.” I riposte – has it left writing completely? Isn’t there plenty of music out there that takes such a laid back or direct approach? Sheff elaborates on his point: “It hasn’t gone out of hip hop, although not all hip hop artists are very direct at all, but it certainly has gone out of rock music as far as I can tell. So to me it felt like I had to compensate for that with this record.”

Sheff’s writing thus far with Okkervil River has been shrouded in characters and imagery ranging from the biblical to the everyday, so I wonder how he’s going to cope with a deeper analysis of this record given he’s been open about it being a very personal experience. “It’s very funny; I guess I have a voice and I guess kind of a writing style where people take what I’m doing very personally and they read into it very personally,” he begins, “which makes me kind of uncomfortable. I guess on some level it’s to be expected because music is really personal to me and I do feel a lot in music…but sometimes that’s embarrassing to me.” Is it not better, then, to continue to hide behind the artifice of previous albums? “I kind of wish I could be Bill Callahan and hide a lot of my ‘self’ behind a scrim, a very artfully constructed scrim,” says Sheff. “But that’s not who I am, and it’s not a very flattering look for me! I just have to be myself.” Okkervil River fans (and I count myself among their number, but not to obsessive forensic lyrical analysis levels) do seem to really identify very closely with Sheff’s writing, which comes from the very novelistic and literary approach he takes to song construction, so isn’t he opening himself up to even more obsession? “I’m very uncomfortable with the way that people read into my writing really intently,” he confirms. “There’s a certain type of fan who is always asking me really squirmy personal questions online, and there’s a lot of people who write stuff to me on Twitter like that.” Sheff tells me of a recent experience: “For example, two or three days ago a girl wrote ‘who is your Jennifer?’ and because of the way that I sing and the way that I write, they’re thinking of course that it’s some girl who broke my heart.” It’s becoming quickly clear that’s not the case, and here’s the payoff:  “Now, ‘Jennifer’ is what we called our van!” laughs Sheff. “It’s kind of a long and boring story, but our Chevy Express van that we drove for years and years on tour is called Jennifer. So that’s what I’m referring to there; but other times I’m not even referring to anything personal at all. It might be a story I’ve made up but there’s something about me and the way that I sing that makes people really want to read into that – I guess it’s a lucky thing and a good thing…but it makes me feel weird. I’m not the Transparent Man, I’m not Slim Goodbody with all my internal organs on show – I don’t want to be that guy, and I never asked anybody to make me that guy…although I think maybe implicitly I did ask that by my mannerisms.”

Isn’t it, then, the worst idea in the world to be writing an autobiographical record, particularly one that references childhood so strongly if Will Sheff doesn’t want to be put under the microscope? He agrees: “Yeah, so it’s a kind of an odd thing writing a personal or autobiographical record when you don’t like people examining what you do!” I suggest that the liner notes should perhaps come with a warning not to read them along with listening to the record: “Ha! I guess so!” Sheff returns to his relationship with his fans: “I really don’t always know why I do what I do in art; my urges as an artist are sometimes at odds with my tastes as a person in terms of what I’m looking for in my relationship with the audience and myself. I’d like that relationship to be very professional…I don’t want it to be blurry. I guess that sounds weird; I don’t mean it in a distant or cold way…I dunno, it’s really difficult for me to say that without sounding snotty. I guess I just want to be cool, and I want them to be cool too!”