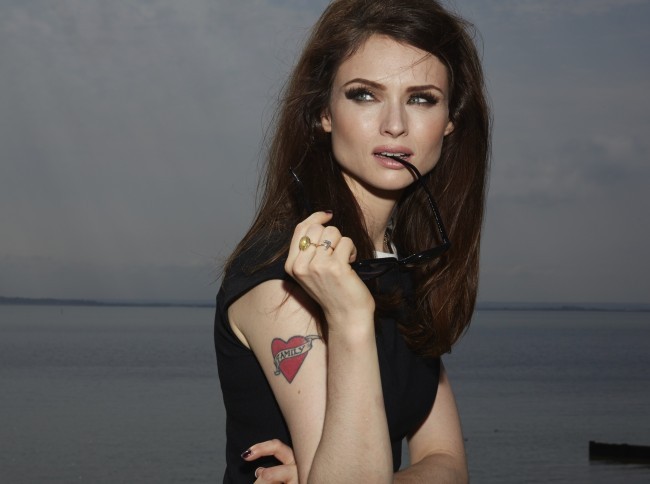 Wanderlust was co-written, produced and arranged in its entirety by one man – Ed Harcourt – which is a first for Ellis-Bextor, whose previous records were the combined works of numerous co-writers and producers. I ask her how her acquaintance with Harcourt first started. She elaborates, “I’ve done a lot of work with a guy called Dimitri in the past, and he is very good friends with Ed and was always talking about him. Around the time that I was doing my third record, Ed and Dimitri were working on this weird, left-field project called Wild Boar and they got me to do vocals on a song called ‘High-Class Nookie In The Abattoir’ - and that was the first time I met Ed. Through that I got introduced to his music – this is going back maybe six or seven years ago. We ended up becoming very good friends and he also did a song, ‘Cut Straight To The Heart’, on my fourth album. He’s since become a family friend and he’s actually my third baby’s godfather as well. ‘Love Is A Camera’ was probably the first time we sat down with nothing to begin with and then finished a song together, from scratch. We’d turn up at the studio and share ideas, lyrical ideas or little musical motifs, and it was lovely. Because I was working with him all the time I wasn’t at all bashful about any of the ideas I had – I knew it was a very safe environment for me”.

The whole album took Ellis-Bextor and Harcourt only two weeks to record. “It was completely delightful”, she says, looking back on that fortnight. “It was a really special atmosphere and we all felt like we were doing something unique”. She describes the sonic moodboard for it as “something that could be the soundtrack to a 1970s Eastern-European film” and the album cover certainly hints at that. “If I could picture people in peasant-wear, toiling under a hot sun somewhere – a dusty place, then, yes – tick! Or even somewhere wintery, a bit Gothic, you know, red velvet, snow, then – yes, that also works for me”.

Of all the songs on the record, the one that was the most difficult to nail down in terms of the arrangement was the rhythmic and rich-sounding “Cry To The Beat Of The Band” – a definite high point on the album. Ellis-Bextor says: “It was one of the last ones we’d written. With most of the other songs we kind of knew where we were headed. Ed was brilliant in his production and knowing what we needed – it was a very concise, lean process, you know, we didn’t really have much to cut off. But with ‘Cry To The Beat Of The Band’ it felt like it was much more carefully pieced together, and it was really only when we had a jam with it and tried different things and pushed it that it really found its feet. It’s one of the ones I really love. Well, I love all of them obviously, but with that one it was really lovely to see it grow. And it’s got a Bulgarian choir on it, which is pretty cool”. A Bulgarian choir, you say? “Yeah, a little trip to the Bulgarian embassy for us to record a choir – that’s definitely never featured on any of my dance records before!”

The release of Wanderlust in January is preceded by the single, “Young Blood”, the demo of which first appeared as a free fan-giveaway earlier this year. “I had a little melody idea and Ed helped me develop that”, she recalls about how the song came about. “The lyrics then sort of fell into place. The new, single version, is a brand new version and a lot quicker than the demo. It’s definitely one of the key ones on the album for me”.

Ellis-Bextor and her band will be launching the record the day after its release with a special show at Bush Hall. She is excited about bringing her new songs to life on stage. “I’m going to have all the same musicians who’ve worked with us in the studio, the guys who recorded it with me. It should be really dynamic. They’re such brilliant guys – we’ll have a ball up there, I think”. Her band line-up includes four musicians – “although I might also have a double-bass player”, she adds. It’s highly likely we’ll get some new interpretations of some of her rich, pop discography, too. “I can’t not sing those songs”, she says. Best Fit can imagine a track like “If You Go“, for example, working well with a Wanderlust-style reinvention. “Yes, that’s true, actually”, she agrees. “There’s definitely a few of them which would – like ‘Today The Sun’s On Us‘ and the other one I did with Ed, ‘Cut Straight To The Heart’”.

We end our interview with that annoying question musicians hate being asked but journalists love asking: which of your albums is your favourite? And to make things a little more difficult, Ellis-Bextor is not allowed to choose the latest one. “Oh golly, that’s quite tricky, actually”, she says. “I’d say it’s probably the third one, Trip The Light Fantastic, because I felt like it was a really pivotal album. I think if you have a really successful first album then you can kind of just have the second album ‘out there’ – but the third one is the one where you really set out your stall, like – whether or not you’ve got a career, or you’re just in it for the good times only. And I think that this was the album where I was, like, right! I’ve really got to push myself, here”. Well, whaddya know, Trip The Light Fantastic also happens to be Best Fit’s favourite SEB record, so that’s all very convenient. Mind you, several listens into Wanderlust, it’s looking as though there may well be a new contender for that crown.

Wanderlust is released on 20 January 2014 on EBGB.