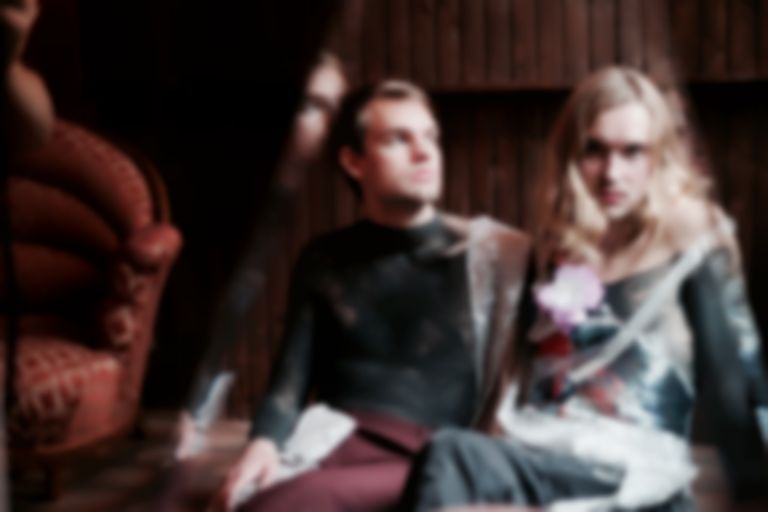 Tom Serner of Gothenburg-based four-piece Ruby Empress shares the experiences and influences that lead to the creation of sprawling debut EP Empressionism.

Hailing from Gothenburg, Sweden, Ruby Empress' journey properly began in Paris in the summer of 2015. Playing shows in warehouses and underground clubs, they described their music as "Debussy disco", but it wasn't until they met their music and namesake, the mysterious Ruby Empress, that things started to come together. Releasing a handful of singles prior to the EP release, including viral-charting "Deluca" the four-piece of Tom Server, Axel Agervi, Melker Petterson and Gustav Hyllstam marry Swedish dream-pop with a cocktail of synths, funk rhythms and psych attitude.

The opening track of the EP is a typical Ruby Empress combo. We wanted to do an intro to our live show where the percussion started before we went on stage and then - bang! - in a blink of an eye you were transported to this powerful world of dance and chaos. As we were loving the Soulwax remix of Jungle’s "Julia", we stole that idea for the beginning and based the rest on a few bars from a not-yet-released song that Melker had done, and then we played around with it. We called it something impossible that none of us can pronounce, not even the French [speakers] that we work with can, I think, but it’s of course a homage to one of the gods we worship - Claude Debussy who wrote a piece called… eh, see above.

This is a song about when you’re so down and out you realise that only someone else can fix you and bring you back to the surface. It’s also about letting go, stopping resisting, and letting whatever you’re afraid of come into your life. It’s a dreamy, hazy thing. We wanted to create a kind of night by the ocean with The Strokes, The Doors and Kenneth Anger all there in the spirit, and all our favorite girls in there in the flesh.

This is a wonderful guilty pleasure ballad. Axel wrote and performed the song himself, and the rest of the band has only added minor things. This is typical Axel. He loves the JV30 and he loves the late 1980s and early 90s kind of VHS universe. And the lyrics, you know and the way he sings them, is so clever: "Funny how the times when I said I would be alone with you / Slipped away so suddenly and so did you,” and later, "Funny how you try to hide your spots and wish that they weren't true / Honey I've seen everything and so have you." We would like to hear it in the next Richard Curtis romcom.

What has not been said about this song already? Hm, it’s our first and most popular song so far, perhaps because it very clearly belongs to a specific genre: the kind of indie-chill, easy psych that is so close to sand, waves and wind, and to our hearts. Look, it’s so funny because whatever we say about this song we end up in metaphors about the weather. Musically though we wanted to let it grow and develop into something really powerful. Gustav came up with this incredible drumming that is such a big part of the song and that’s how it became very popular I think. Lyrically it’s a bit far out and strange, but it’s basically a break up song about trying to tell yourself its fine, when it’s pretty damn not fine at all. I think we'll do more of these songs in the future. We would also like to see this become a video.

I have been so fascinated with flamboyant parties in the past, and what it must have been like in New York in the seventies and early eighties when places like Studio 54, and later Area and Limelight opened. The lyrics are all about that, with parts and references that should be left to the listener to explore. The song itself we wanted to be both dark and bright, because that’s partly the danger and pressure, partly the thrill of exploring the frontiers, be it pop culture, fashion or music. There’s also the fear of being left out or not hip enough, and seeing the elite have fun without you being invited or part of it. When you read about these places it’s clear that even those who were there had those fears. Extravagant parties has a long history. Acne Paper - the best magazine in the world - had an issue about this. Acne Paper come back! Oh, I must mention that the video will premiere at Noisey on Feb 21st, you’ll want to see that.

This is a poem from our muse the Ruby Empress. This is how she is, thinks and speaks to us. We didn’t write the poem ourselves, she did. It sounds strange, but it’s true. Ruby Empress also speaks English with a French accent which is strange and charming we think. The music is by Melker. We plan to do a film of this also. We did a film for another of her poems, you can see it here.