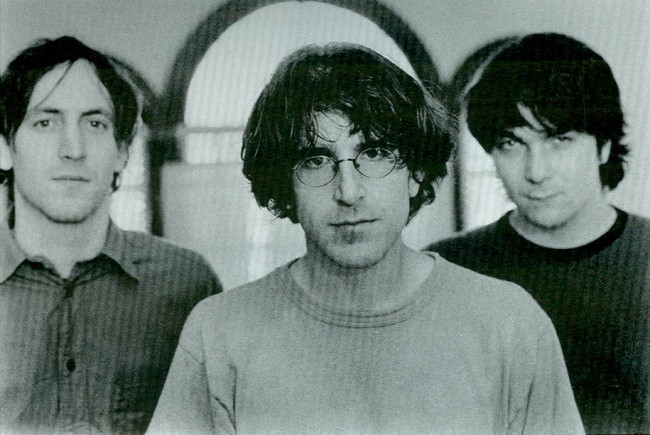 It’s nearly twenty-five years since the release of the first Sebadoh record The Freed Man, and Barlow and Loewenstein (who joined in 1989 but didn’t play on a Sebadoh record until 1991) are still as prolific now as they were back then…it’s just that we don’t see as much of it released as we did in the 90s. Prior, though, to the release of the album Barlow and co dropped a surprise EP, The Secret EP via the Bandcamp website, taking advantage of an outlet that didn’t exist the last time the band released music. I ask Lou if he’s got more freedom now than he used to when it comes to recording and releasing music, but the answer reveals that not as much has changed as you might think: “We did the EP on Bandcamp ourselves just so we could have something to play,” he reveals, “and it helped us buy plane tickets so I could fly Jason and Bob out here to record the album!” It turns out, though, that some old friends gave Sebadoh some welcome support: “In the end we went right back to Domino, because they’ve been great to us,” states Barlow. “Domino has been wonderful, y’know, and we’ve a label here in the States as well. I don’t think we were ready to go without a label and I don’t know if could have, to be honest. It’s too much work! That’s way too much to do that kind of stuff yourself – that takes a level of determination and ambition that I don’t have! I would rather spend my time thinking about new songs rather than doing endless amounts of clerical work.”

Sticking on a similar theme, I ask Lou if changing technology has affected the way he records his music: “The bulk of Sebadoh’s material in the 90s was recorded in a studio, and actually with the way that technology has gone now it’s really enabled the whole recording. In a way, the evolution of technology has made it possible for us to go way back to our very early beginnings – us recording ourselves.” And is this how Defend Yourself came together, self-recorded? “Yeah, so this was entirely self-recorded and done with just the three of us; we didn’t have engineers and we didn’t have a studio. But in the 90s we did spend a fair amount of money on studios but this time it was real basic.” Given his personal circumstances have changed since then, but he’s back playing with Dinosaur Jr again – does it feel like a curious mix of 20th and 21st century Lou Barlow out there trying to get a handle on things? “I guess in the 90s when we did have the studio time I didn’t worry,” says Lou. “I just did it. I didn’t have kids, you know, I was just living in an apartment with my wife/girlfriend and if I had to go into a studio I didn’t think about how much money it would cost. But now…I have children, it’s like – ‘oh my god!’ – saving money is absolutely crucial. You have to make the most of what you have and in so many ways we’re at the same kind of level we were at in the 90s. We still battle it out from record to record and try to make ends meet, but now it’s even more necessary to make sure that everything is cost effective. So coming back to that earlier band aesthetic, doing everything ourselves is kind of a necessity.”

You could put together a playlist of Sebadoh tracks from 1989 through to now, and aside from the quality of the recording you’d be hard pressed to guess which year any individual track was from, so consistent is the band’s sound and the song writing of Barlow and Loewenstein. So does anything from the outside world make it through to influence a Sebadoh record? “I guess the only thing I could say which consistently influences me is 60s garage music,” states Lou. “The thing about that is that I like really naturalistic recordings. I don’t like things that sound like they’re a commercial; things that sound really produced and compressed, full of effects…I mean, I love records like that, I listen to records like that, and I have no problem with records like that.” Does he have much of an interest in current trends or what’s the latest flavour of the month? “I love pop music!” he admits. “I mean, I don’t care. I could listen to the new One Direction song and take it and appreciate it for what it is…but when it comes to my own thing, it has to emerge from the Sebadoh world, from a place where we’re almost mostly influenced by ourselves.”

So the biggest influence on Barlow is basically himself? “Yeah, I want it to come from our little world of recording; I want the biggest influence on any Sebadoh record to be the Sebadoh record before it! I don’t know if that’s the right way to go about it, and in some way I wish I was more influenced by, or that I wanted to imitate, other things because that’s how people become successful – they imitate other things and tweak it. But with Sebadoh we’re kind of stuck in our own little ways.” But that’s what makes Sebadoh so special and cherished still, after twenty five years is it not? “I have a very specific style which I refer to on my songs,” says Barlow, “this kinda strange little drum beat and strumming style that I stick to and this record was no exception. I wanted to add to the Sebadoh discography and almost reference old Sebadoh records, rather than showing people the influences of what I listen to now.” I mention what often makes their songs stand out is that the bass and guitar are given equal billing; the bass isn’t just there as bedrock and nothing more, or it isn’t lost in the mix like some latter day Dinosaur Jr records. On saying this, Lou initially jumps to the defence of his old pal/foe J Mascis: “Ironically, what really influenced the recording and that whole attitude of the bass and guitar being equal were the early Dinosaur records,” he reveals. “On the first three Dinosaur records, the bass is prominent; it actually functions very much ‘in the mix’. The idea of the bass being totally drowned on Dinosaur records…that’s a style that J developed after I left! If you listen to the first three Dinosaur records, the bass is there, and they were a huge influence on Sebadoh when we transitioned into being an electric band – my bandmates were influenced by Dinosaur Jr, I was obviously influenced by being in the band so to me we were carrying on the original spirit of Dinosaur Jr.”

So as the keepers of the true flame, Sebadoh will keep on going. As Lou reveals there’ll be a 2014 tour to follow some select UK dates in October, I ask if there’s likely to be less of a gap between this record and the next: “I hope so, I would love to do that, it would be great. We just have to see how people respond and if people are willing to go see us! Does anyone want us back?” Daft question Lou, daft question.

Defend Yourself is available now on Domino.