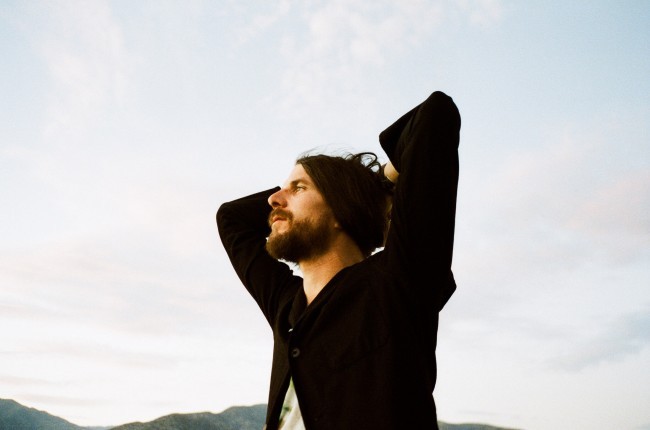 When would you say that you are happiest or most in your element?

Maybe these days I’m feeling most energetic or charged performing. I guess there is a culmination of all this other training, doing all these other things, and what it was all coming to.

Has working with musicians such as Graham Nash and Roy Harper changed how you hear their music? Does it speak to you differently now that there is a personal connection there?

Yeah, it definitely does. For people that I’ve met and become friendly with in the business, that are performers or artists, there is a heightened interest first of all and then there’s this DNA based connection if the person turns out to become your pal or something. But there still is a bit of wonderment, like if you talk about those two guys for example, you go back and listen to them and it’s just magical. There’s still some disbelief that the person is your buddy. Then comes the bigger thing that they came into your existence for a purpose, to teach you.

I think that’s a beautiful way to look at it. If you could sit it on the recording session from any record in history, which would it be?

I think I would have to go with Love Supreme. If I could sit in the corner being the tea-boy or something for A Love Supreme, that would be the one.

Good choice. I understand that the recording set-ups for Gentle Spirit and Fanfare were quite different. Do you have a personal preference for a more intimate situation or the grander, larger scale?

I like both, and I think there is a purpose for both. For Gentle Spirit I was literally cutting those in my kitchen, giving that homespun vibe which I think for that album was perfect. Whereas Fanfare I think you may lose a bit of that intimacy in favour of the bigger sound stage and a grander scale. So with that in mind there’s a purpose to both. Maybe the next time I’ll go to a more extreme personal record.

Fanfare has been frequently described as a bigger and more ambitious album than Gentle Spirit, but in what ways do you feel that the two are similar?

Definitely there are some songs that could be interchanged between them both. Stylistically I’m not planning on abandoning the sound that I always had in favour of some new fixation. So both the albums, and most likely any I do, will contain some of the same sentiment and instrumentation. One of the ways that they’re similar too is that I’m using the same guitars and same organ and things like that, so there’s the same tonal base. But definitely Fanfare is much more of a professional affair.

What would you say prompted you to push in that direction with Fanfare?

I think it was just a life fascination with frequencies, constantly trying to get the best drum sounds on the planet and things like that. Also being influenced by the albums that I have been obsessed with and searching for the spiel that was in. I purposefully referenced Pacific Ocean Blue; some of those songs have the biggest drum sounds and things like that. I was fascinated with the grandiosity.

On both albums there seems to be a motif of woman’s laughter in the background. Was that deliberate or a coincidence?

Yeah, the opening track [of Fanfare]. I guess to me that may be one of the world’s most beautiful sounds. Soothing, and for sure that may be more musical than the songs of the album. I actually wrote that down. I keep a journal about the album, just jotting down different ideas, and it came to me to open the album with that laughter. So it was just something that I was inspired to do.

You also have a tradition to do a cover song per album. Do you have any in mind for the future?

You know that’s a tough one because there are millions of songs that I like, but it has to fit like a puzzle piece. It has to fit the vibration and it needs to have a purpose that can be in a way larger than one of my own songs, because it’s taking up the bandwidth and time. So in the case of “Fazon” the first time I heard that song I was just like “what is this man?” It represents this cosmic sentiment you know, perhaps better than I could ever do, so I had to. But I think that maybe the next one would be a traditional song. That could be cool.

I love your cover of Bob Welch’s “Angel.” The first time I saw you play was in Paris in July at Cafe de la Danse, and after hearing you cover “Angel” I went and discovered a lot of Bob Welch’s music.

Oh that’s cool. That would definitely be a song to record because we sort of developed that into a bit of a journey.

You definitely do. Are you able to talk about what you have next for Jonathan Wilson or any upcoming projects?

Right before I came on this tour I’ve been working with Lana Del Rey on some tracks. She’s amazing; I love her and the whole thing. I’ve been doing songs with her and I’m just about to complete the second Father John Misty, that’s just about to be done. I’ve also been doing an album with my pal Conor Oberst, from Bright Eyes. I’ve been doing his solo stuff. But the biggest thing that will be on the table is just a lot of touring for this album. As the tours get bigger I’ll be able to approximate more of the sound of Fanfare. Because at this point it just can’t be done.

And a bigger van. A bigger band. That’s the goal.

I’m curious; do you have a favourite film Jonathan?

I do. There’s a few that I go back to, but one of them is Little Big Man. It’s Dustin Hoffman and Faye Dunaway – babe of the century – and it’s directed by Arthur Penn.

Have you ever scored film? Is it something you would be interested in?

It is for sure. There have been a few ‘almosts’ for that. Things that were about to happen but did not pan out, but I’d be extremely interested.

I think you would be suited to it. Lastly, one thing that strikes me about your music is that you sing of women with a lot of admiration and respect. With this in mind I listened to your music more and I think you do sing of the world more broadly with a lot of respect. Do you have any thoughts on how people present their emotions and experiences in music?

Hhm. Well, I think it’s a process of distillation, trying to distill your chaos. The only way that it can translate is if you distil it down to truth. There are so many songs and albums, but there’s something about the ones where the people are resonating with people and there’s some sort of truth in there. Whether it’s the truth of an imbecile or a poet, there’s usually something that’s visceral and unique about the songs that tend to rise above. I guess it’s just being conscious that the purpose of a song is to convey some sort of truth of emotion.

Fanfare is out now on Bella Union. Jonathan is set to tour Europe in April, culminating with a show at London’s Village Underground on 3 June.