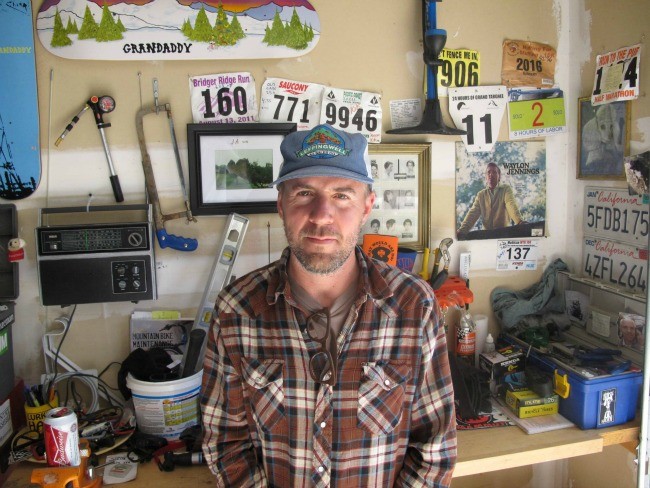 Before the interview took place I had looked at the gap between Grandaddy records and there’s a consistent three year gap between each, so I asked Jason if this was time that he needed to get away on his own and think about what’s next for the band? “A lot of it started off really self-sufficient, kind of like a home recording, a scrappy thing,” he says, “and I got so on that track that I couldn’t really get off it. There was a period of time where it would have possibly been good to bring in somebody else.” I ask Jason if this was ever really likely to happen, given that it’s hard to separate him from Grandaddy’s work: “I was so conditioned in that way of working that I would always think it was time to make these records myself… but I don’t even know if it would have gone any faster! I’d known other bands, who worked the way they do, who’d finally got to the point of asking for help, and someone would come in and it was a fucking disaster. Nothing sounds the way it’s supposed to sound, and you end up scrapping that and starting over again.” So Lytle put that idea to the side, in case it simply extended his recording and writing process after coming off tours. “We would end up touring like a year and a half, two years… if you think about it. We’d get right off tour, try to decompress a little bit and then start making another record. So if you think about it, that’s the right amount of time between each record.” There’s a tiredness in Lytle’s voice and demeanour when he speaks of this period in Grandaddy’s history; it’s clear it took a lot out of him and I feel slightly bad bringing up memories of a time that he doesn’t really want to return to.

But he has gone back to the band, and I ask how things are now with Grandaddy; they’ve played a few shows, so what’s the feeling? “It’s been fucking fun!” exclaims Lytle. “It’s been really great actually, and the only thing that’s freaking me out a little bit is the loud rock sound! These venues are just so loud. We’ve played a wide variety of different scenarios on this tour; we did some warm-up shows in and around Modesto and those were really fun, crazy, and slightly chaotic… but great preparation for the first of the big shows that we did. As long as the sound is good, I’m totally fine.” So is it fair to say it was like no time had passed? “The rehearsals were great, and hanging out with everyone was awesome,” confirms Lytle. “For me, the only thing that’s weird is that I’m just not used to always – 24 hours – being around people. It’s kinda starting to wear on me… but, it’s amazing, all it takes is a very well-placed day off. I disappear, I go on trails, I run, I hang out in my room and just take care of some things back home and I kinda feel like my life shifts back into shape again. Then I feel like I’m able to deal with all the fart jokes and tour chatter again!”

I quote a comment of Jason’s back to him in which he stated he was fed up “being around four girlfriends all the time”, so can he handle it better this time? “You know, I’m damned if I do and damned if I don’t. I’ve created a life for me at home – I have a wife, I have a dog, a few friends, and I’m so busy doing other things. She knows my deal and she’ll leave me alone. I spend so much time by myself, and y’know, it’s not a bad thing. It gives me time to figure stuff out, but I do like hanging out with other people. I need to be centred, though, and in order for me to be centred I need to have enough time by myself. It’s fine, we’ve another day off in a couple of days!”

Getting back to the reunion shows, I ask Jason how they’ve approached the setlist for the tour – have the band had to be unsentimental in cutting songs from shows simply because they’ve got so many to choose from across four albums. “I have three categories,” he reveals, “I made a master list; partly gauging it from songs that I remember that went over well. It’s partly tongue-in-cheek: we have ‘the rockers’, or ‘hits slash rockers’-“ I rudely interrupt Jason to say that this immediately called to mind Jeff Tweedy and Jay Bennett’s disagreement over playing “easy rockers” in Wilco’s I Am Trying To Break Your Heart documentary. He replies: “Yeah but most of what this is all about, and what we’re aspiring to do with this little string of shows is the perfect blend of us having fun, the audience enjoying themselves and then making some money. They’re the three big things, and in order for those to fall into place I’m trying to keep everyone in mind – and at one point I actually thought I’m going to have to a very ‘set’ setlist. But already I just have to mix it up to keep it interesting, to the frustration of our visual guy. He’s flying blind when I deliver the setlist five minutes before we go on.” Jason must have been kinder to the poor chap on the evening that I saw the band in Glasgow, as all the videos playing behind the band seemed to match up with the songs Grandaddy were playing. Anyway, back to that list: “Beyond the hits and the rockers was ‘the favourites’ and then there was ‘others’. With all of those, I came up with a list of 24 songs that we could pick and choose from. I just want some dynamics: some nice spacious ones, some chugging along ones, and just making a good setlist.”

Has the way Grandaddy play the songs changed at all, as they’ve not been near the tracks since 2005? “A little bit, little bit,” admits Jason. “Actually the part I’m pretty thrilled about too is that for a while now I’ve got new pieces of gear that do a really good job of emulating the actual recorded songs. I had to go back and create – and I spent a month doing nothing but – revisiting all the old tracks, studying them and seeing if there were specific samples and specific sounds and whether I needed to take them from the actual master tapes or if I could somehow recreate them. So that took a while!” And the work didn’t stop there: “I did my whole rig, then Tim’s whole rig as well, then figuring out who was going to play what, and when all that was said and done the sound… the sound is so much better than the stuff we used to tour, so that part of it has been fun for me. But basically, play the songs like you know them!”

I end with the question that the whole interview is building towards. I’m almost tempted to say goodbye to Jason and not ask it, but it’s hard to tell exactly where he stands. You can hear the tiredness in his voice when he recalls the pressure on him (to some extent Lytle is Grandaddy and all the rest are players, although fine ones at that), but then he genuinely seems to be enjoying playing the shows, doing the sound and poring back over the records just to get the setlist right. So, here it goes… will we hear another Grandaddy record? “Grandaddy are all my dear friends, we’ve shared a million stories and I’ve grown up in the band, but it was nice to have my solo record and be ‘me me me’ whiny and not have to worry about expecting some other guys to play this stuff!” This doesn’t sound too promising. However, Jason continues: “I don’t even think I told them that I plan on making one,” he reveals. “I actually really love the idea of making another Grandaddy record… but it’s like the only way I can do it and be okay with it is if no-one is rubbing their hands together – no! The only reason I’m gonna make another Grandaddy record is that I wanna hear another Grandaddy record, y’know? And it’s going to be hard as shit, torture, and it’s not gonna be enjoyable making it but, like, I’m just gonna make it because I want to hear it myself!”

I guess it’s always been the case that if the band were to make another record, Jason Lytle would have the final say. Watching them onstage a few hours later, the band looked like they were having so much fun being back together, even throwing in a cover of Pavement’s ‘Here’, and Lytle making a quip about having an affection for bands that don’t exist anymore. Despite all the apparent hell that goes into making a Grandaddy record, I’m not sure Lytle will be able to resist the lure – not for getting on the party train again, not for the money – simply because he’s a man that loves making music. And really, how else is he going to spend all that “me” time?

Dept. of Disappearance is available now through ANTI-.