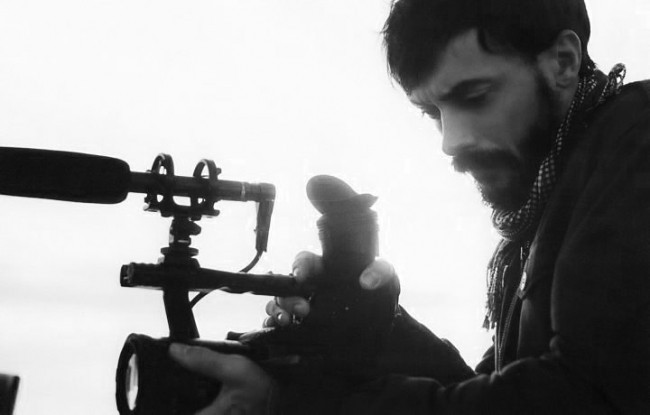 To help fund the post-production and promotion necessary for From ATP, Moon turned to Kickstarter, although he’s surprisingly cool when I ask him about the site’s perceived merits. “There’s some amazing projects that have been made that way, but a lot of bullshit too, with people trying to use it for the wrong reasons. I haven’t used it again since From ATP; it’s great that it allows you to make the intermediaries disappear and have a direct relationship with the people who effectively become your producers, but crowdfunding isn’t the only way to do that. I’ve often relied on local contacts; it can be as simple as finding somebody you can stay with for a little while, and then they might know somebody who can drive you out to whichever remote village you might be shooting in – you’re still relying on others, but it’s a more personal way of working and living.”

Many of the contacts he’s built up down the years have been fans of his work on La Blogothèque; he might not lean too heavily on crowdfunding, but the internet has certainly played an integral part. “I’d get in touch with people who’d emailed down the years,” he recalls, “telling me how much they’d enjoyed the Take Away Shows. I think a lot of them were surprised that I was interested in local music, because all they wanted was to have people in their area playing the same kind of music as Beirut, or Arcade Fire. The most rewarding aspects of my work these past few years has been encouraging the young people in these places to look into their own culture; it’s meant I’ve been able to discover it with them, and change their own perception of the places they live in.”

There’s no avoiding the fact that Moon’s work with some of the names he’s dropped so far is the primary reason he’s speaking to us in the first place; he’s collaborated extensively with some real heavyweights, and you wonder precisely what it was about his approach that attracted the likes of R.E.M. and The National. “You should ask them!” he laughs. “Most of those bands weren’t really very well known at the time, I guess. I mean, I’ve been friends with The National from the really early days, from their first trips to Europe. What interested me about La Blogothèque was what a good job Christophe (Abric, founder) was doing of contacting these bands and getting them onboard.”

“I think, at the time, there wasn’t the saturation of video recordings in that style that we have now; it was still pretty new, pretty fresh. Bands would come over on promo tours and spend the whole day in a dark room, answering the same questions every thirty minutes, and when we started doing the Take Away Shows, we were just saying, “look, we’d like you to spend that thirty minutes in the street, playing for us.” Back then, I think they found that very exciting. Nowadays, though, I have friends complaining to me, saying “wherever we are on tour, there’s always a fucking guy turning up with a camera asking us to play in the street!” I think it’s been overdone now, and it’s starting to drive people nuts.”

It seems like a strange coincidence that I should speak to him at such length about his newfound love for traditional and religious music on the same day that he’s going back to working with a band like Efterklang, although he quickly shoots down any suggestion that he might return to working with conventional rock bands. “I don’t really see myself being interested in that kind of stuff again; I don’t even really listen to it any more. I know that tonight, I’ll have a great time because I love those guys and it’s a very important night for them, their last ever concert. It’s interesting, actually, to draw parallels between that kind of indie music, which was really my first love, and what I’m interested in now. Tonight’s this big, important event, and I’m going to film the whole show in one take. I think it has a sense of significance attached to it, and that was what attracted me to the rituals I’ve been following this past year or so. I think it’s possible to enter into a kind of trance through both of those types of music, in the right circumstances.”

I spoke with Moon for just shy of forty-five minutes. He barely stopped for breath the entire time, and that seems like a reflection of an incredibly active mind; he’s bursting at the seams with new ideas when I ask him what he does see himself doing next. “I feel like I’ve come to the end of a five year cycle, where I’ve been refining a certain style,” he says. “I’m really happy with where I arrived with that, but now and again you have to just turn things upside down and do them differently – that’s the normal way to create, for me. I want to experiment with different formats, and eventually expand what I do to include pure sound recording. I want to take some time to write, too, and focus just on that; I’ve been trying to do as much of that as possible, recently. But the truth is, ultimately, I really don’t know what’s next. I never really seem to. I guess that’s the beauty of doing what I do.”

Vincent Moon is streaming the From ATP films on-line now, including one exclusively on Best Fit.