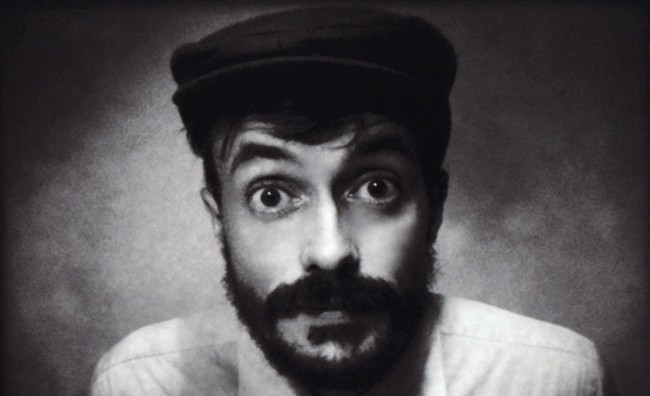 Moon’s work elsewhere in the world prevented him from attending either of the End of an Era events that brought down the curtain on the UK’s ATP weekenders, but he does feel that there was already a sense of things reaching a natural end long before the festivals were finally consigned to history last December. “It was incredible that they managed to keep it going for so many years without sponsors, because nowadays it’s fucked up how the name of the festival always goes alongside the name of a brand. They were really proving it was possible to do things differently, but I think the energy that was so special about it had already started to fade by the last couple of times I was there.

“They might have started to do too many; it never seemed as special when it happened three or four times a year. Plus, they seemed to be going against the original idea of having one artist curate everything because, by the end, there were always a few of the artists on their own label on the lineup, too. But things change, things evolve, and I’m happy I was a part of it. It was the kind of thing that only could’ve happened in the UK, I think; you don’t get that same passion anywhere else.”

Moon missed those final ATPs because of his work on Petites Planètes; in fact, he’s spent very little time whatsoever in Europe during the past five years. The project saw a major shift in focus for him, moving from working with established Western acts to exploring traditional music in some of the world’s most exotic locations. “At the time, I was just living it,” he says of his decision to leave La Blogothèque behind. “I left Paris because I’d become bored with the culture there, so I moved to New York to live with a girlfriend – not the most radical place to go, really. She kicked me out not long after I got there; suddenly, I was homeless and had nowhere to stay. It made sense to travel because I had a real desire to discover new music; I felt like I’d done as much as I could with professional musicians and, little by little, I started to become attracted to things I wasn’t familiar with. I remember being invited to go to Chile, and when I got there, I ended up staying for a while and exploring the local culture, because I had no place to go back to.”

“I discovered that the idea of music I’d had in mind, of going to shows and seeing people on stage playing music for an hour or two – it was just very wrong. If you go back to ancient times, music was never on stage, there was never that divide between performer and spectator. In a lot of the cultures I went and researched, that’s still the case, and I became obsessed with the purity of that idea; exploring a a culture through music, particularly these cultures where music was all about community. I made the films in the same spirit – very improvised, very DIY, just my little camera and my backpack – but the focus was totally different.”

The sheer tenacity of Moon’s passion for the project is blindingly obvious, if only from his manner of speech; he talks – very eloquently – at a rate of about fifty words per second, one of those second-language English speakers that puts you to shame by being twice as articulate as you in your own mother tongue. “As you go a little deeper with that kind of music, you quickly get into spiritual stuff, religious stuff. The next thing I’m going to do, in two or three months, is settle in Brazil, in the Amazon, and make some films about music and spirituality. There’s been a real resurgence in shamanism there, and I’ve become obsessed with the use of chants in the Amazon; they’re the deepest use of music I’ve ever heard. I was in Peru a few months ago, researching Ayahuasca rituals; they’re healing rituals, where they use a psychoactive plant to allow the shaman to see your sickness, and then he’ll sing the appropriate song to take it away. It was the most beautiful thing, so powerful. My interest in music and sound has totally switched towards that kind of thing now.”

I wondered how he came to decide which places to visit; was he just sticking pins in the most obscure locations the map had to offer? I mention Chechnya, a place that I know little about beyond its reputation for separatist unrest, and probably the last place on earth I’d give much consideration to culturally, and in musical terms. “It seemed like the obvious thing to do was to go to places I didn’t know anything about,” he explains, “places that I could go to and develop an understanding of as my research progressed. I knew a little bit about Chechnya, because, of course, we’ve all heard bad news come out of there. My desire was really to go beyond that kind of media firewall; we live in a world where we think we understand different cultures, because we live in this information age, but it’s not true – the media has left us with a really fucked up understanding of certain cultures.”

He’s on a roll at this point; I’d struggle to get a word in edgewise even if I wanted to. “In Chechnya, I realised that what we’ve heard about radical Islam is absolutely fake, absolutely wrong, and that actually there’s so many incredible aspects to the Sufi Islam there. I ended up making a series of five films on Sufism because nobody else has done it, and I honestly think it’s my best work. Nobody knows about those cultures because there’s never been any effort to report on them. I think that was kind of my mission, to help people to understand places like that better.”

There’s an obvious emotional investment in the communities that he became part of whilst working on Petites Planètes; his use of the word ‘mission’ doesn’t ring false, by any means. “I’ve not made these films for the cool kids in New York, you know?” he says. “There’s a really beautiful quote from the American thinker, Hakim Bey, who said that every recording is a tombstone of a life performance. I think, with that in mind, we should really be careful about this idea of recording everything for the sake of it, because there’s this idea that keeping everything for the next generation is important – I think that hurts a lot of cultures, if what’s been recorded doesn’t represent them properly.”

There’s probably no greater indicator of the fact that Moon makes films for the love of it than his insistence on releasing all of his work for free online, under Creative Commons license. “I think I’ve always wanted to prove that there are other options, outside of going down the usual business-driven route; I do really believe in the idea that culture shouldn’t have any monetary bias involved. The other thing, though, is that it’s forced me to keep a low profile, because I’ve always had to live without much money. That’s challenging, sure, but a good thing in that it keeps your working relationships simple; I couldn’t afford to pay any of the musicians, so if they were working with me, I knew it was because they wanted to. That’s been especially hard these past few years, when I’ve been trying to collaborate with people who don’t give a shit if I’ve worked with Arcade Fire or R.E.M.”