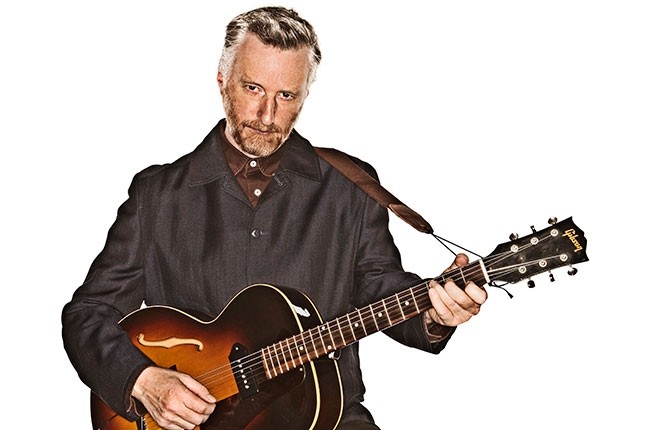 It’s not difficult to draw parallels between the soulful undertones of that roots music and the politically-charged nature that has underscored much of Bragg’s work, and he agrees that the two concepts are by no means mutually exclusive. “One of my favourite political records of the past few years is Pull Up Some Dust by Ry Cooder; it’s a very, very powerful album. He’s channelling Woody Guthrie on it, directing all this anger towards what’s gone on with the credit crunch. You could argue he invented Americana; he was exploring Woody Guthrie and the songs of the Depression back when everybody else was listening to the Eagles. He’s the perfect example of how those two ideas are very similar; seeing him representing Woody inspired me hugely.”

The classic, time-honoured formula for a Billy Bragg record generally involves love songs and political songs being given roughly equal representation, and Tooth and Nail is no different; Billy points out that his albums aren’t quite as politically-dominated as they once were. “I think any record I make is a bulletin from where I am at that moment in time. The difference is, previously I’d have to wait til I got an album out and I’d have all these political songs I wanted to put on there, and that wasn’t ideal because obviously they’re topical; by the time Between the Wars came out, the miners’ strike was over, and by the time it reached Australia the subject matter was ancient history. These days, the Internet means I can get the political songs out there straight away; ‘Never Buy the Sun’ was written on the Friday, performed on Saturday, up on YouTube by Sunday, recorded with the band on Monday, mixed on Tuesday, up on my site as a free download on Wednesday and then on Thursday, Murdoch was up in front of the Leveson inquiry. That’s exactly how it should be.”

Despite the fact that some of Bragg’s most famous works are non-political – ‘A New England’ and ‘The Milkman of Human Kindness’ spring to mind – he’s often pigeonholed, and occasionally dismissed, as a political songwriter, which, I suggest, must be the source of some frustration. “I was up late last night tweeting about Hugo Chávez, and I’m going on Radio 4 to talk about farmers’ wages. I don’t mind being called a political songwriter, but it does bother me when I’m dismissed as one. I’ve seen bands that talk about nothing else but politics, and they bore the tits off me, to be honest. I’m just influenced by humanity and human frailty, whether I’m writing about love or agricultural wages.”

It’s impossible, of course, to talk with Bragg and not touch on a wide spectrum of political issues; there’s mention of Chávez’s recent death – “whatever you think about his methods, there’s a lot of leaders in Latin America now who feel like they can stop their local superpower from leaning on them, ever since Chávez stood up to the United States,” – as well as the fresh surge in support for UKIP – “if they split the Tory vote, they’ll be doing us a favour. What we need to expose is that behind Nigel Farage and his smart suits, there’s a xenophobic, sexist ideology driving that party.” There’s discussion, too, of his experiences at the last general election, which saw him vote tactically for the Liberal Democrats in an effort to keep the Tories out. “I think what I learned from that was that cynicism is as big an enemy as any. What they did, jumping into bed with the Tories, was enough to make a saint feel cynical, but there’s no point dwelling on it now. I’ve dusted myself down so I can get on with doing what I was trying to do when I voted for them yellow toerags, which is stop the Tories from tearing our country apart.”

Bragg was also heavily involved in the student protests three years back; I draw his attention to the obvious discrepancy between the vast numbers of young people involved and the dearth of young political songwriters in the country today. Why are so few members of that generation using music as their main tool of expression? “When I started out, songwriting was the only medium for someone from my background – I wasn’t going to get a newspaper column or a slot on Question Time, so music was the only soapbox I had. These days, it’s much easier to use social media or blogs or even YouTube to get your point across, so that’s what’s happening. I think this generation is just as political as every other, but they’re also finding themselves in this post-ideological vacuum where they aren’t being given the framework to build a campaign by the mainstream parties.” When he does provide me an example of modern political songwriting, it wasn’t quite the name I might have expected. “I hate to say it, but Ed Sheeran’s ‘The A Team’ is a totally political song, especially the video, and sixty million people have watched that online. Don’t tell me this generation aren’t interested.”

Bragg is completely on a roll by this point, constantly weaving the themes of his new record back into the discussion; I’m starting to wonder if I’ll ever get him off the phone. “There’s a lot of ambiguity in this country. That’s why nobody won the last election. That’s what I’m talking about on ‘No One Knows Nothing Any More’; people can see what’s wrong, but feel powerless to change it. We’re living in a country where the European parliament has to step in to curb banker’s bonuses because our own government won’t do it. That’s a sorry state of affairs.” After three decades in the business, Billy Bragg remains every bit as vital, as insightful and as angry as ever; just don’t believe for a second that he’s not looking for a New England.

Tooth and Nail is available March 18 via Cooking Vinyl