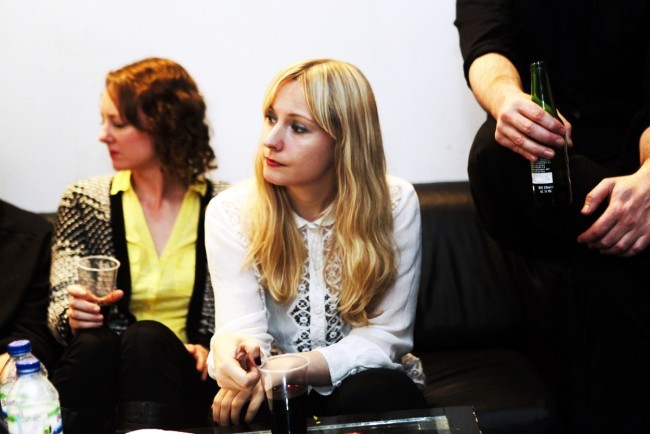 Lanterns on the Lake have said before that their homeland, the north of England, has great presence in their music. We ask if this is true for the second album, and they all chuckle. “There were some weird things happening in our part of the world at the time,” says Paul.

Hazel elaborates; “You’re influenced by what you’re around, and I don’t really think it’s just about the North; it’s more about our experience of life in Britain at the minute. Before we made the last record we’d never toured Europe or been to America or anything, and this time around we had. A lot of people ask if we’re purposefully writing political songs or whatever…”

Sarah interjects; “I think a lot of people want to stereotype the North a lot, and because we’re from Newcastle people always ask ‘what’s like, is it grim?’ and that kind of thing and yeah, it does totally affect you – it would anybody – but I think it was more the whole state of the nation and how we felt at the time.”

The band seem intent on making us understand that the album isn’t a political statement, as some have come close to labeling it. Paul continues, “There probably are bands out there who think ‘everything looks a bit fucked-up at the minute. The Tories are in – we’ll just write some songs about that and play on it a little bit. It’s not a gimmick, it’s just what’s influenced us. We’re not the Manic Street Preachers or, y’know, Billy Bragg or anything. It’s just, there’s a thread of that through it that we can’t help. A lot of the things we talked about on this record were things like friends losing jobs, and all sorts of stuff, and a lot of that was going on around that time and will continue to do so, but I think when you talk about the positive things in the record… the North-East is still a really amazing place to live, and it’s a place that we’ve all grown up in and we absolutely love it. I think people have this ‘it’s grim up north’ approach and feel that that’s something we’re trying to get across in our music and I don’t think it is.” There is a strong murmur of agreement from the band, and he continues, “If we are influenced by where we live, and I’m sure we are because everyone is, it’s as much by how amazing it is as it is by some of the more difficult things going on there.”

“The good people, as well,” chips in Hazel, “the stories that you hear. It’s just everything; it’s just life.”

As we move onto the logistical release of the album, we ask the band about their production, and they say that Paul was responsible for all of it. “I used to have lots of hair!” he says, laughing. “We started making EPs ourselves because we’d been in studios before and hadn’t had fun. They cost a lot of money and you have to be very quick, and you can’t really get across what you want to a person that you’ve met for an hour, so we decided to do it ourselves. We bought a four-track – or was it sixteen? can’t remember – and had no idea how to use it. I just watched loads of YouTube videos and we literally worked out how to do it from there. We recorded with a guy in London called Pat Collier years ago, with another band, and we kind of remembered how he did things. Oli plays drums, and when we set drum mics up we tried to remember how he did it but obviously got it completely wrong.”

Hazel chuckles and says, “Actually on the first EP I remember we only had one mic and Oli was playing and I just stuck the microphone up in the room and was like ‘is that what you do?’ and he said ‘don’t know – ah it sounds alright.”

“It was just like a big muddy snowball rolling down a hill, really,” says Paul. “We’d record stuff and realise that, actually, that sounds awful, and do it again. When we came to do the first record I can’t remember being asleep very much, it was mental. I kept thinking ‘this is actually going to be released on Bella Union and we actually have no idea what we’re doing’. We still don’t really know what we’re doing. I mean, if you’re trying to learn how to record a violin or a cello and there’s some American kid going ‘this is what you do’ you just copy that – and that’s literally what we did.”